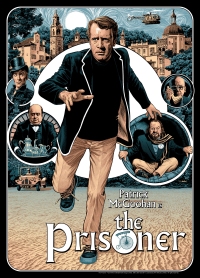 Available as a numbered colour print (limited to 125 copies) at £40, or black and white (60 copies) at £50, the item has been officially licensed by ITV and depicts Patrick McGgooan, Portmeirion, and some other familiar faces.

See below for the full press release.

The posters will be on sale at Thought Bubble in Leeds who can be found at tables 49 to 51 in the Leeds Town Hall Marquee. From 28/9 remaining copies will be on sale online. Click HERE then to visit their website order your numbered poster.

In a tremendous gesture from the guys at Vice Press, The Unmutual Website is excited to announce that poster #6 will be auctioned via The Unmutual, with profits from the sale donated to Ty Gobaith (Hope House) Children's Hospice. Please send an email with your bid, the highest bidder will win the auction!

Update: The above offer has closed. 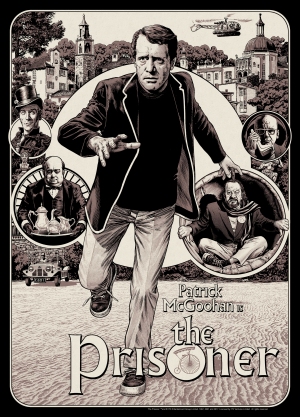 This month marks the 50th anniversary of the British Sci-Fi classic The Prisoner and to celebrate, under license from ITV Studios, Vice Press will be releasing a very exclusive limited edition screen print by artist Chris Weston.

The Prisoner stars Patrick McGoohan, known only as Number Six, who is a former government agent who abruptly resigns from his job and has been imprisoned in a beautiful and charming-yet-bizarre and enigmatic community -- a mysterious seaside "village" that is isolated from the mainland by mountains and the sea. Presumably wanted for the top-secret information he knows, Number Six is hunted, yet thwarts his captors at every turn. However, he's still trapped in the village by floating, glowing "rovers," mysterious, balloonlike devices that capture those who try to escape.

The Prisoner is such a classic of British sci-fi t.v and it is a title we have wanted to approach for a while. As this month marks the 50th anniversary of the show’s release, there is no time better than now. Artist Chris Weston was is a huge fan of The Prisoner and his classic, retro rendering lends itself perfectly to the sci-fi style of the show. (We are just waiting for more info from Chris and will send through a quote).

Both prints will be released by Vice Press at Thought Bubble in Leeds who can be found at tables 49 to 51 in the Leeds Town Hall Marquee. Remaining copies will br available online at www.Vice-Press.com on Thursday the 28th of September at 6pm British Summer Time.

"I’ve made no secret about how "The Prisoner" is my favourite television show of all time. I first saw it when it was repeated on Channel 4 on Monday nights during 1983-4. All my friends watched it too, and we’d run to school on a Tuesday morning to meet up and discuss what we’d seen the night before. We’d excitedly offer our theories about what it all meant and where it was going. Quite frequently we’d all descend into laughter whilst discussing "The Prisoner" as it had a thick vein of absurdist black humour running through it; something my friends and I really responded to. We’d all try to make each-other laugh by pulling our best imitations of Patrick McGoohan’s facial expressions: the sly smile, the frown of frustration, the medicated bewilderment…

The teenage years are ideally the best time to watch "The Prisoner". As adolescents, we were held captive in an Eighties typically British Comprehensive school, where blazers were still part of the uniform. We adhered to baffling rules and values made by a generation forged in military service. It’s pretty easy to see why Number Six became a hero to us: his uncompromising resolve to rebel against the regimen forced upon him. In most episodes, McGoohan’s Number Six never quite managed to beat the system abusing him, or escape the confines of The Village… but he never gave up! He’d find a way to sour or subvert the victories his tormenters thought they had over him.

Revisiting the show as part of my research for this print project, I was astonished at how well its production values have stood the test of time: "The Prisoner" looks great! Jack Shampan’s imaginative production designs, the costumes, the locations and the sets are all beautiful. It’s “mod” design aesthetic and psychedelic colours make the show seem quintessentially Sixties... and yet, somehow, it is simultaneously timeless. I think that’s how you define “classic”. It is photographed immaculately on 35mm celluloid by Brendan J. Stafford, and in comparison, the cinematography on your average Bond film from the Sixties looks decidedly ropey. Even in the Eighties, twenty years after its first broadcast, “The Prisoner" looked better than everything else on British television (which was mostly shot on nasty video-tape).

I have always wanted to create my own artistic tribute to “The Prisoner”, and I have frequently been asked to produce unofficial prints for the show. For some reason I turned down these offers; in my gut I knew I should hold out until I received an official offer to produce a licensed print. It just didn’t feel respectful otherwise, considering the pleasure this show has given me throughout my life. Fortuitously, my friends at Vice Press offered me the chance to fulfil my lifelong ambition to create a loving artistic homage, timed to coincide with the show's fiftieth anniversary, and these new official silkscreen prints are the result. I could not have been more delighted and I poured heart and soul into the project. I wanted to create "The Prisoner" poster that my school-friends and I would have wanted for our bedroom walls, way back in the Eighties!”

With thanks to Lew Stringer, Nick Joy, and VGice Press for this news item. News announced 20/9/17.