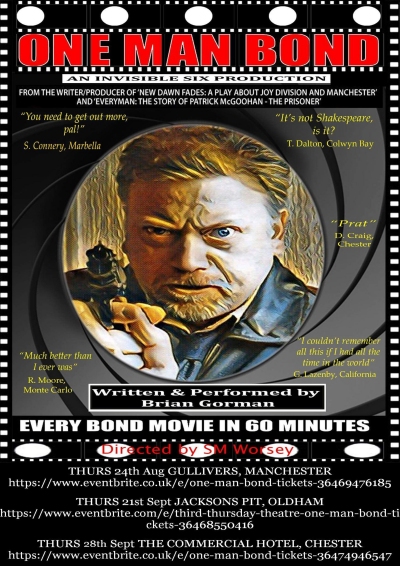 A brand new stage production, 'One Man Bond: Every Bond Movie In 60 Minutes', which chronicles over half a century of the most successful movie franchise in history, is set to tour the north of England in Autumn 2017.

The show has recently been commissioned to be performed at the world famous Pinewood Studios (home of the Bond movies), and can also be seen at the upcoming Starburst Magazine International Film Festival in Manchester.


'One Man Bond: Every Bond Film In 60 Minutes' stars Brian Gorman as over 200 characters, including every James Bond from Sean Connery to Daniel Craig, including M, Moneypenny, Q, and the infamous villains Dr No, Goldfinger, Blofeld, Mr Big, Scaramanga, Jaws, and Raul Silva. It is a whirlwind tour of every cinematic adventure of the world's favourite secret agent, and his often outlandish missions to save the world time and time again.

This unique production features a single actor, without elaborate props, costumes, or special effects, and takes the audience from the groovy, psychedelic sixties of the super smooth Sean Connery, through to the modern day bone-crunching, and ultra realistic, Daniel Craig.

Manchester-based Brian Gorman is a life-long Bond fan, having read all the Ian Fleming novels as a child in the 1970s, and seeing every movie dozens of times. He wrote, and co-produced, the highly-acclaimed stage play, 'NEW DAWN FADES: A Play About Joy Division & Manchester' which has toured nationally for the last 4 years, and played to capacity audiences and standing ovations.

First confirmed stand-alone performance of 'One Man Bond: Every Bond Film In 60 Minutes' will be at the popular Gullivers, in Manchester, on Thursday 24th August.

One Man Bond: Every Bond Film In 60 Minutes is written by Brian Gorman (writer & producer of New Dawn Fades: A Play About Joy Division & Manchester, Everyman: A Celebration of Patrick McGoohan and The Prisoner, and co-writer of the 2013 stage version of Blade Runner.). The director & producer is SM Worsey of Invisible Six Ltd.

What the reviewers said about 'New Dawn Fades: A Play About Joy Division & Manchester':

“… a spellbinding and brilliant play about one of the greatest bands of all time. I totally urge anyone left out there who believes in music to be so much more to go and see it.”
John Robb, Louder Than War, www.louderthanwar.com

“I was crying. It was very emotional at the end. It captured everything perfectly. I loved it; it had everything – the music and the emotion... there was such a buzz in the building.”
Rowetta, Happy Mondays

“New Dawn Fades is more than a play about Joy Division; it’s about Manchester, friendship, love and heartbreak … it’s clear this is a piece full of energy.”
Tracey Lowe, The Good Review

More dates to be confirmed.