By Rick Davy, with thanks to Steven Ricks for his invaluable help. Images (c) Rick Davy unless otherwise stated.

This page of Collector's Corner looks at items which were used in the production of the series.

To help with filming, call sheets were issued in advance of each days filming, listing who and what would be required. For filming outside of the studio, movement orders were used. Countless numbers of these were retained by crew, actors, and extras after filming and are in many private hands. 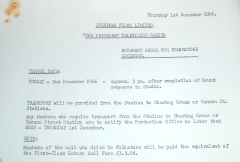 Scripts for the series, including the two page addendum for the opening sequence, were printed on foolscap paper, and many have been retained and are in private hands. 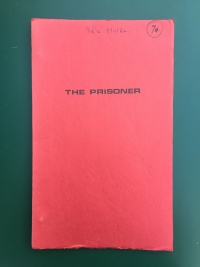 Other documents used in filming included a 'writer's guide' devised by McGoohan/Markstein (which many of the writers state they never saw), a Music Bible booklet, used by music editors Bob Dearberg and Eric Mival to catalogue all the music recorded for the series, a film library document which Tony Sloman and David Naughton used to keep track of all the library shots filmed for the series, and Jonathan Jones of Porthmadog, who was in charge of the local extras for Portmeirion filming, 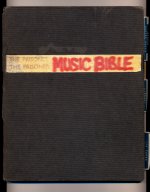 Before filming would begin, art director Jack Shampan painted set design paintings for the art, dressing, and props department to make real. Most of these paintings still exist, and are owned by Steven Ricks (a small selection are seen here on display at 'Fifty Years of The Prisoner' at Elstree Studios). 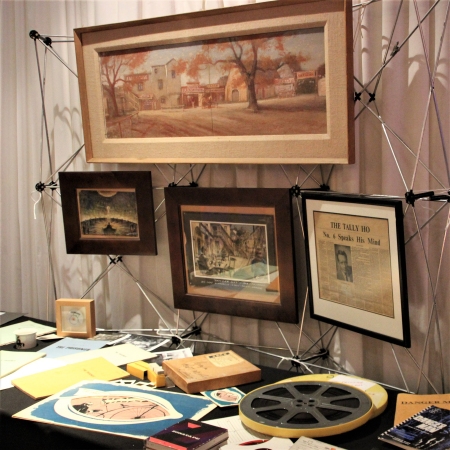 The series was filmed on 35mm prints. After each days filming, the rushes would be viewed and the film sent to Kodak Eastman to be struck. The photo below is shows the front of one of only two prints in existence of The Alternative Arrival episode. 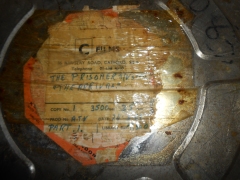 Music for the series was recorded on tape, with several of the original reels still in existence today, such as the below master tape of Robert Farnon's compositions. 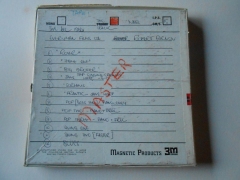 In addition to the 'official' filming, a number of 8mm films were shot by day visitors to Portmeirion during the filming of the early episodes, back in September 1966, behind the scenes, most of which have been released on DVD/BluRay sets over the years as special features, with most owned by Steven Ricks. The photo below is of the roll of film filmed by Keith Rodgerson of the filming of Arrival, owned by Rick Davy .

One of the most fascinating behind the scenes rolls of film was footage of the original Mark I Rover device, and below is that roll of film. 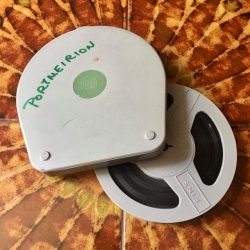 Prior to to the series being made, in July 1966 series production manager Bernie Williams accompanied the original producer Leslie Gilliat to Portmeirion for a recce, where 16mm film was taken of the location, and a number of 35mm photographs. Both the original film reel and 35mm slides still exist today (owned by Steven Ricks and Rick Davy respectively). The box for the 16mm film originally contained rushes for the film 2001. 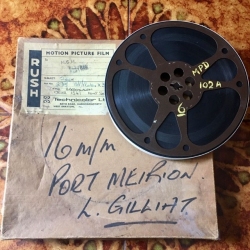 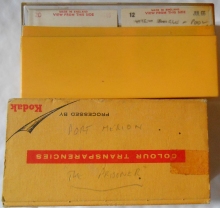 Below is one of the photographs, depicting the newly constructed piazza (the markings on the tennis court which stood previously can still faintly be seen).

Christmas 1966 saw Patrick McGoohan give out Christmas cards to cast and crew, which were designed by Jack Shampan. They featured a Penny Farthing, Rover, and Angelo Muscat, with the original, in large size, shown above and owned by Steven Ricks.

For close friends on set, Patrick McGoohan also bought Christmas presents, including this vase, now known as 'Pat's Pot', which he bought for music editor Eric Mival. These pots are Danish, and examples in different colours can actually be seen on screen in the series (most notably in Colonel J's office in The Chimes of Big Ben).

Another piece of Eric Mival related memorabilia is the following painting. Painted by Eric, the painting depicts a scene from Ticket to Eternity, the unmade Prisoner storyline that Eric submitted to Patrick McGoohan and David Tomblin in 1967. 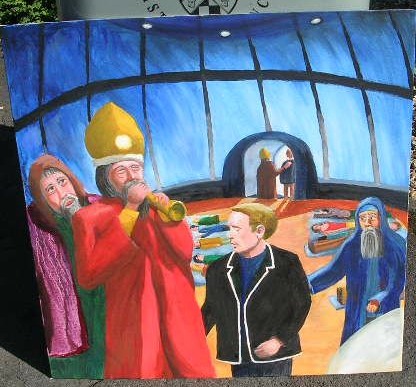 Other items: In 2019 a supposed-original second unit clapper board was sold at auction for £2000.

Before and at the series launch, there were several documents issued by ITC to promote the series: A card foldout press release, a press booklet with background information (24 pages long), and a story information booklet. In the USA a similar synopsis press pack was also issued. 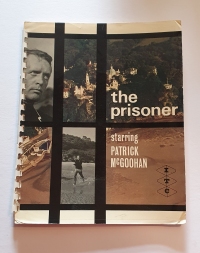 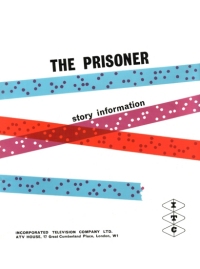 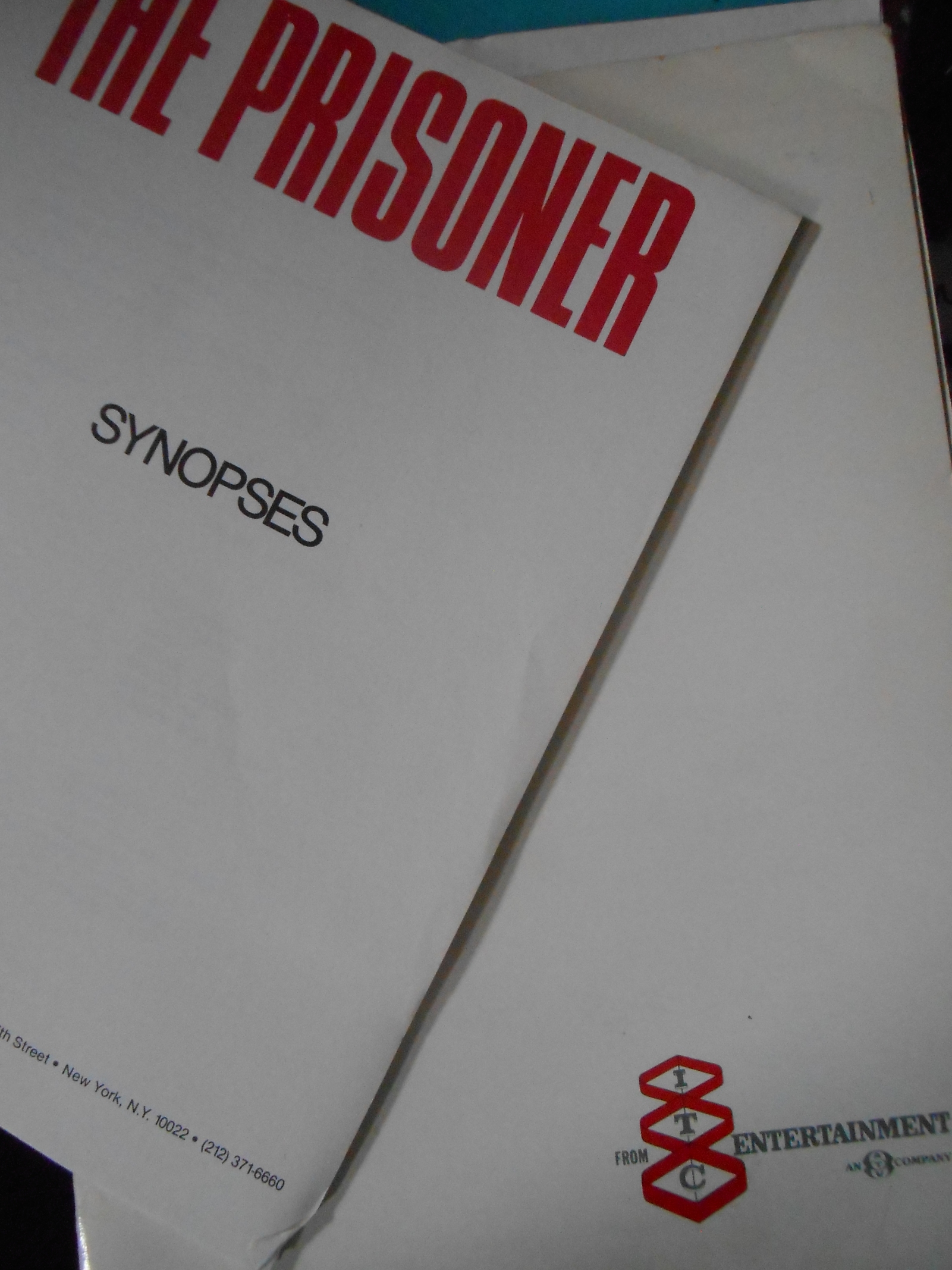