The Village as Utopia: Two Literary Precursors of Portmeirion

By Craig Conley, from http://www.oneletterwords.com/weblog/?id=13076. 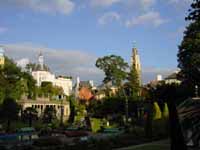 Strange as it may sound, two authors who spent their holidays at the village of Portmeirion seem to have been inspired by the place even before it existed. Both H. G. Wells and Lewis Mumford wrote books about Utopias, and it’s fascinating to look back at how they helped us to understand the “future” Utopia that would one day be called “Portmeirion.”

But writers are usually influenced by Portmeirion after they’ve seen it in person. Since the village first opened to the public in 1926, dozens of authors have discovered that its atmosphere somehow inspires them to write. So it’s no small wonder that science fiction writer H. G. Wells found Portmeirion so intriguing. Imagine his surprise when he discovered the “no-place” of his dreams here on earth. In 1904, Wells wrote a book called A Modern Utopia.1 It is part imaginative fiction and part social and political commentary. Yet the world he describes bears an uncanny resemblance to Portmeirion and to The Prisoner television series filmed there.

On the morning after his arrival at a lakeside village, the narrator of the book gently comes awake from a “vague nightmare” (chapter three). Then he starts up and apprehensively inspects his chamber. “Where am I?” he wonders, and then realizes he is in bed in Utopia. The very idea of an actual Utopia brings him out of bed and to the nearest window, where he sees a great mountain behind the inn. No need to point out the similarities of this scene to the opening scenes of The Prisoner. But it gets even better.

We learn in chapter five that Utopian prisons are placed on islands. Wells describes a typical one: there is a Custom House near the port, “and beyond, crowding up the hill, the painted walls of a number of comfortable inns clamour loudly.” A small house, looking directly toward the sea, calls itself a Gratis Information Office, “and next to it rises the graceful dome of a small Casino.” Even in Utopia some criminals must be exiled, but the lawful citizens see no reason for further torment. When Wells first saw the coastal village of Portmeirion, with its own dome and colorfully painted inns clamoring up the hillside, he certainly must have recognized it as part of his own imagination.

But back to Wells’ own village with an inn. In chapter three he describes it as being surrounded by mountains, a valley, and a lake. The innkeeper apparently cannot imagine his guests as being from anywhere beyond that. The village is composed of “gracious” little houses, clustered together, and full of a great variety of trees. A road plunges deeply into a gorge.

In chapter five, Wells tells us that everyone in Utopia is identified by a number. The narrator explains to the postmistress that he and his companion “come from another world. Consequently, whatever thumbmark registration or numbering you have in this planet doesn’t apply to us, and we don’t know our numbers because we haven’t got any.”

These aren’t merely casual parallels to the village and to the television series filmed there. But that doesn’t necessarily mean that either Patrick McGoohan or architect Clough Williams-Ellis was familiar with A Modern Utopia. It’s more likely that H. G. Wells was tapping a sort of collective human imagination—the same source that inspired Sir Clough to plan that Utopia and McGoohan to bring it to life on television.

Lewis Mumford is another interesting case in point because he foresaw how a dreamer architect could build his fantasy realm out of worldly materials. Mumford so admired Portmeirion that he practically made it his second home. As with Wells, the actual village must have seemed to embody his own earlier ideas. But as we will see, that’s where the similarity between authors ends.

Mumford wrote The Study of Utopias in 1922.2 The following brief sketch of his main idea should help to demonstrate why he found the village so captivating later on.

In the introduction he suggests that what makes human history interesting is that we live in two worlds: the one within and the one without. The world within includes all the fantasies and projections that pattern people’s behavior. Mumford observes that the physical world is inescapable, but the world of ideas exists on another plane. It is our substitute for the external world—a kind of home to which we flee when reality becomes too much.

At the same time, the world within serves to sort and sift our everyday concerns . . . “and a new sort of reality is projected back again upon the external world,” Mumford says. This serves one of two functions: as a means for escape or compensation that releases us from our daily frustrations, or as a means for providing “a condition for our release in the future.” The second function seeks to change the external world so that one can deal with it on one’s own terms. Mumford explains that in the first function, “we build impossible castles in the air,” while in the other we hire an architect and a mason and begin to build an environment which meets our essential needs.

Utopias of escape are good only for short visits, however, because they are imaginary. Perfection would be unstimulating and paralyzing. But “Utopias of reconstruction” seek to alter the physical world and the mental framework of the people who live there. Mumford notes that we can’t dismiss our ideals from the facts of our lives. “[T]he things we dream of tend consciously or unconsciously to work themselves out in the pattern of our daily lives,” he writes. “We need not abandon the real world in order to enter these realizable worlds; for it is out of the first that the second are always coming.”

So Mumford must have found in Portmeirion a testimonial to his belief that humankind can realize its Utopian dreams in the physical world. Indeed, Sir Clough stated frequently that his ideal was to develop a beautiful location without spoiling it, and even to enhance its natural beauties. His finished product proved to be more than a mere fanciful extravagance (as his critics would have it). Portmeirion remains today a good commercial business. For all its visitors, Portmeirion is a “no-place” where we can actually spend the night and forget the ugly problems of the “real world” outside. And whether we be famous authors or not, we might even be inspired to dream up some of our own solutions.

Author Thomas Love Peacock never lived to see Portmeirion, but his novel Headlong Hall3 (1816) can be read as an uncanny before-the-fact overview of it. The following parallel comparison demonstrates that Peacock and Sir Clough must have been tapping into the same source.

How Portmeirion Inspired Noel Coward to Write a Famous Play4

Our diagram below illustrates how Portmeirion can inspire a writer to produce a famous work. The diagram is based upon the experience of playwright Noel Coward. On May 2, 1941, Coward took a train to Portmeirion for his holiday. As the train climbed through Snowdonia, an idea for a light comedy was stirring around in his head. He had come for the resort atmosphere and packed accordingly. But in addition to the bathing suit and suntan oil, he packed his typewriter, lots of paper, and even some carbons. Arriving on a golden evening, Coward sighed with pleasure at the mountains and sea in the late sunlight. He settled into his suite at the Fountain and retired early. In the morning, he sat on the beach—back against the sea-wall—and brainstormed about his play for several hours. By noon, he decided upon the title, Blithe Spirit, and the characters’ names. He even constructed a very rough plot outline. The next morning, he sat in front of his typewriter, flanked on either side by a pile of blank paper and a box of carbons. And he sat... and he sat! He fidgeted with the table legs. He smoked several cigarettes and gloomily watched the tide running out. Then he typed the title. He kept typing for six days, writing from 8 to 1 and then 2 to 7. By the evening of May 9, his play was finished. He would change only two lines from the original text. 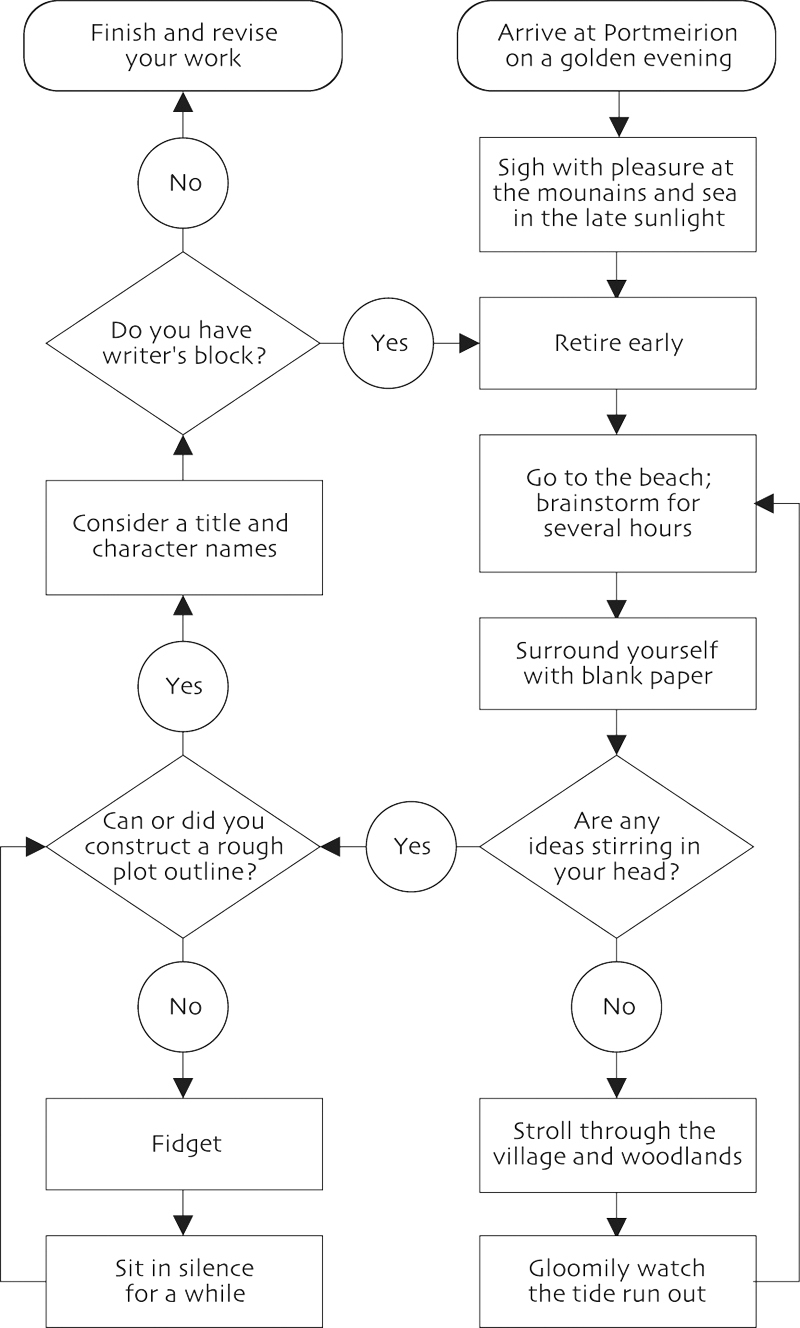