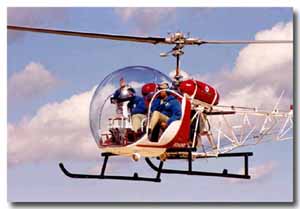 IN THE PRISONER: The Helicopter which Number Six clings to after the scenes at "Witchwood" in the episode "The Girl Who Was Death".

IN REALITY: A 1966 Bell 47D-1 c/n 183 , an American-designed craft also manufactured in the UK by Westlands. The one used in "The Prisoner" was codenamed G-ATSH and was UK-registered on 11th March 1966, and operated as a crop-sprayer out of Rush Green Aerodrome in Hertfordshire for Farmair Limited. The heicopter seen in "Girl" was destroyed after catching fire upon landing at Cranbrook Airfield in Kent on 11th June 1971.

This type of helicopter was also used extensively in the popular US TV Series M*A*S*H. More information on these magnificent machines, sometimes referred to as "Whirleygigs", can be found at the website of the Bell 47 Helicopter Association (Association CEO Joey Rhodes kindly provided the photograph shown here of a 47G2) which is located at http://www.bell47helicopterassociation.org