THE PROJECTION ROOM (The Prisoner Compared...)

LUPIN III - CHURCH OF THE POISON MIND By Des Gorra 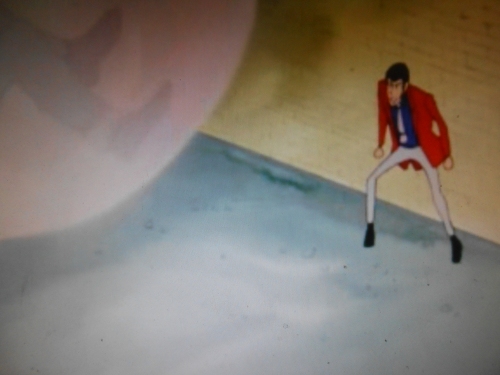 At the moment, I watch a fair amount of Japanese anime as streamed online by channel99 (see below).

Last week, I was only half-watching as I was doing some metal-bashing, but thought one episode of a series seemed to be making Prisoner references. I hadn't seen the very beginning, or caught the episode title, so had no idea if I was right, or just imagining things.

However, as things proceeded and I paid more attention, I realised I was not imagining that...

The series is Lupin III (Lupin the Third).

If you are unfamiliar, then the description in Wikipedia is probably a good place to get some background, and identify the characters and theme:

Hunting it down online identified it in full as:

I can't find an online version, at least not on YouTube, and all my other searches end up with Hulu as the source, which will not play content in the UK as far as I can see.

Coincidentally, just to confuse things and mess up searches, it was just released (August 2014) as a live action film remake (which can be ignored):

Back to the anime, I eventually tracked down a proper episode review, which tallied with what I could remember, and covers most of the content, and the source is 'Prisoner aware'. Here it is:

=====
Lupin is at his hideout, grabbing several weapons from his vast armory. He rushes out the door and past a confused and slightly dismayed Inspector Zenigata, headed on a rescue mission. He has received a message from Jigen and Goemon, who have somehow been trapped in the village of Gemarschaft. Lupin arrives at the all but deserted village, the only sign of life the ringing of the church bell. He suddenly spots something in the distance: a massive pink floating bubble with a man trapped inside that lands behind the church. Rushing to the sight, he arrives just in time to see the villagers surrounding the man from the bubble; they have stoned him to death.

The door of the church opens and the crowd greets a beautiful nun, Sister Lavina. She orders the village to ponder the choice the dead man, #108 made, and reminds them that the bells will bring them inner peace. As the bells sound again and the crowd disperses, Lavina calls for #106 and #107. To Lupin's shock, Jigen and Goemon emerge! Sister Lavina coldly tells them to dispose of the dead man before her.

As Jigen and Goemon dig a grave for the late #108, Lupin confronts them, asking them about the rescue message he received. His two friends seem oddly distant as they declare the note was a mistake; they truly have found peace and serenity in Gemarschaft. Lupin doesn't buy it for a second and asks them if they're concerned they'll end up like the dead man because of Sister Lavina. Upon the put down, Goemon and Jigen's eyes glow with an eerie white light. Angered, they threaten Lupin and demand take back his insult of their beloved Sister. Lupin reluctantly apologizes, and the two go back to their calm state.

Confused, Lupin storms to the church where he finds Sister Lavina serenely playing the organ. Holding a gun on her, he demands to know what she's done to his friends, and informs her he'll be taking them back home. Lavina calmly states that they are free to leave anytime they wish. Lavina then tries to appeal to Lupin to get him to stay. Ever rebellious, Lupin declares no one will ever tell him what to do as he storms out of the room.

Back in the village, Jigen and Goemon have been set up in a small house. Their calm and slightly disturbing domestic scene is interrupted when Zenigata kicks down their door, punches them, and puts them in cuffs; he is completely dismayed when they fail to respond in any way. Jigen calmly sees through Lupin's disguise and tells him to knock it off. Later, Lupin sits on their porch and contemplates what's going on; the bells sound yet again, and Jigen and Goemon calmly head off to bed. Annoyed, Lupin shakes them awake, but triggers something; their eyes flash and they suddenly turn violent. Believing him a demon, they grab their weapons, and go after him. Lupin is forced to jump through a window to escape, but the broken window lets in the sound of the church bells, instantly calming the gunman and samurai.

The bell sounds again the next morning, and as Sister Lavina speaks to the villagers, Lupin pulls out a set of earplugs he used to keep the sound of the bells out. Figuring his friends' weird behavior is tied in to them, he uses a grappling hook to climb to the church's bell tower. Inspecting the bell, he finds it is a fake, and a speaker inside the source of the ringing. He follows the speaker wires to a nearby radio. Putting the pieces together, Lupin heads into the church, where, after playing around with the organ, accidenly opens a secret passageway underneath. Following the underground tunnel, he overhears Sister Lavina, making a report about an experiment on the village noting she has positive results. She also mentions the trap she set for Lupin seems to be working. Lupin confronts her at this; she confesses she is actually a psychologist and is using the village to experiment on creating perfectly obedient drones for warfare and factory work. She then pulls out a gun and shoots Lupin in the head. Disturbingly, he runs away headless; she only managed to shoot a fake.

Sister Lavina uses the bells to turn the villagers into an angry mob. Jigen and Goemon are answering the call when she appears before them and asks them to go to sleep. Before they can react, she sprays them with knockout gas, then pulls off a mask to reveal Lupin. He loads his friends into his car and makes a break for it, easily busting through the roadblock the villagers have set up. Lavina has one trick up her sleeve, though: the pink bubble. Impervious to Lupin's weapons, it finally chases him underwater before sweeping up him and the still unconscious Jigen and Goemon. It brings the three before Lavina and the villagers. She gives Lupin one more chance to join her experiment, but he refuses; she then orders Jigen and Goemon to wake up and kill their friend. She sends the bubble high into the air so Lupin has no chance of escape.

Lupin manages to trick Goemon into popping the bubble with his sword. As he falls, he shoots the bell and knocks it down, destroying the sound equipment and bringing all of the guinea pigs around. Dismayed that her experiment is in shreds, Lavina escapes in a bubble of her own, threatening revenge against Lupin. Just before she gets away, he fires a dart into the balloon that fails to pop it, but also fills it with hydrogen gas. Lavina drifts off into the distance, shrieking in horror.

As Lupin and the now cured Jigen and Goemon look over the once again peaceful Gemarschaft, Lupin asks if, even though they were hypnotized, there still wasn't some part of them that enjoyed trying to take him out. The two admit there may have been some hidden pleasure, and Lupin decides this is enough for them to walk home. He speeds off into the sunset, Jigen and Goemon yelling after him they were only kidding.
=====

The original review can be found here:

If you also cannot watch Hulu (which seems to be the only online on-demand source, since all other sites claiming to deliver it just embed the Hulu content), then you can try the source where I caught it, but as I said, it will not return to anime until after Christmas and the New Year, AND it does not have a schedule, so there's no way to be sure when it will be streamed. You just have to keep watching.

That said, the episodes are shown in sequential order, so once you identify one, you can work out roughly when an episode will come around.

You need VLC (http://www.videolan.org/) or Winamp (http://www.winamp.com/) to play the streams, but since Winamp was closed and taken over about a year ago, unless you were already a user, it's best to go for VLC.