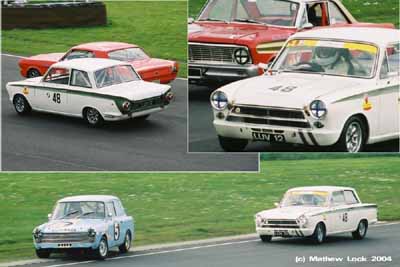 IN THE PRISONER: The car features in the Episode "Do Not Forsake Me Oh My Darling" as the car driven by Number Six's "tracker" Potter, who follows Number Six to Austria on the trail of Professor Seltzman..

IN REALITY: The Lotus-Cortina, or "The original Fast Ford", first appeared in 1963 to satisfy the US public's thirst for more sporty cars. Walter Hayes, then Ford's Public Affairs Director, conceived the car and took it to Lotus supremo Colin Chapman as he knew Lotus were looking to develop a twin-cam engine of 1498cc.

Chapman accepted, and the Lotus 28 (or "Cortina developed by Ford") was born. Whilst the car had a reputation for good performance, it also quickly became better known for it's reliability problems (particularly with the suspension) and the car was superceded by the MKII Cortina in 1967 after selling less than 3000 of the original model.