Over the years, there has been much discussion regarding the location of the tree seen in the centre of the western village of Harmony from the "Prisoner" episode "Living in Harmony", in which Number Six is fed hallucinatory drugs.

The set formed part of the MGM backlot in Borehamwood, which was demolished in the 1970s, and a large housing estate now sits on the land. There are several large trees in the estate, and for years debates have arisen as to which one, if any, is the one seen in the episode (from which Kathy's brother is hanged). In July 2012 after years of discussion, "dead certs", and much more, the mystery has now been solved thanks to Kieran McAleer and the members of the MGM Borehamwood Memories Facebook Group!

Writes Kieran; "the remaining trees give us enough of a reference to be sure where Harmony, and in particular, the hanging tree, and the tree outside the Toby Carvery (see below, a tree much rumoured to be the one appearing in the episode's scenes) stood/ still stand, respectively"; 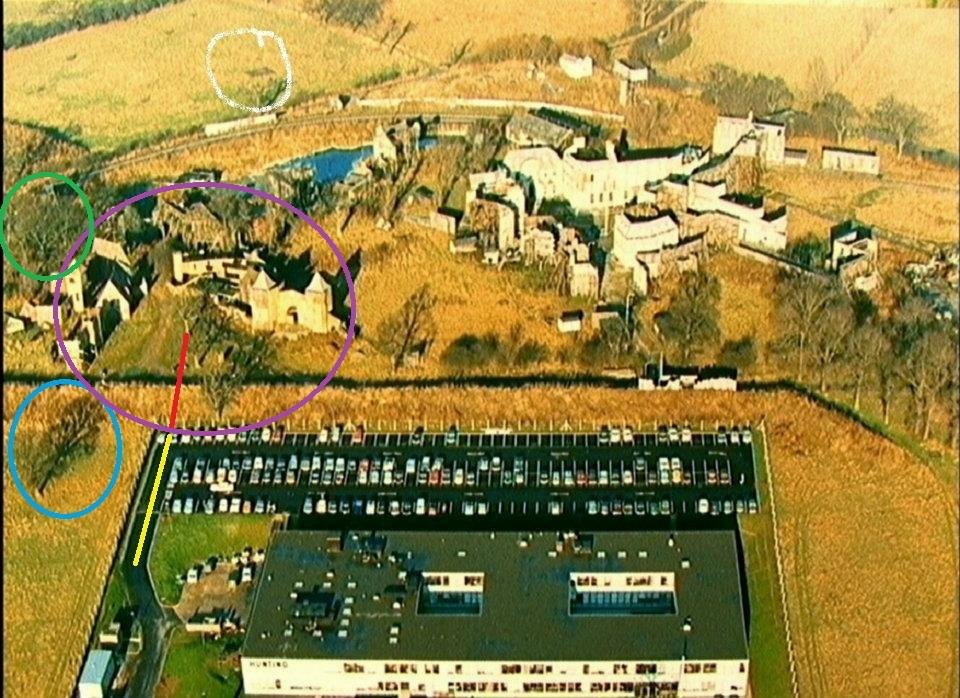 " This second aerial photograph is the site as it appears now. A couple of my circles don't exactly match in comparison, but that is just the way the Paint application made them, so reference is better made, by looking at the trees. The straight lines correspond exactly, so we can STILL visit Harmony, and the EXACT site of the hanging tree, by standing in Rutherford Close! Incredibly, two large tress, just South-West of Harmony, still stand"; 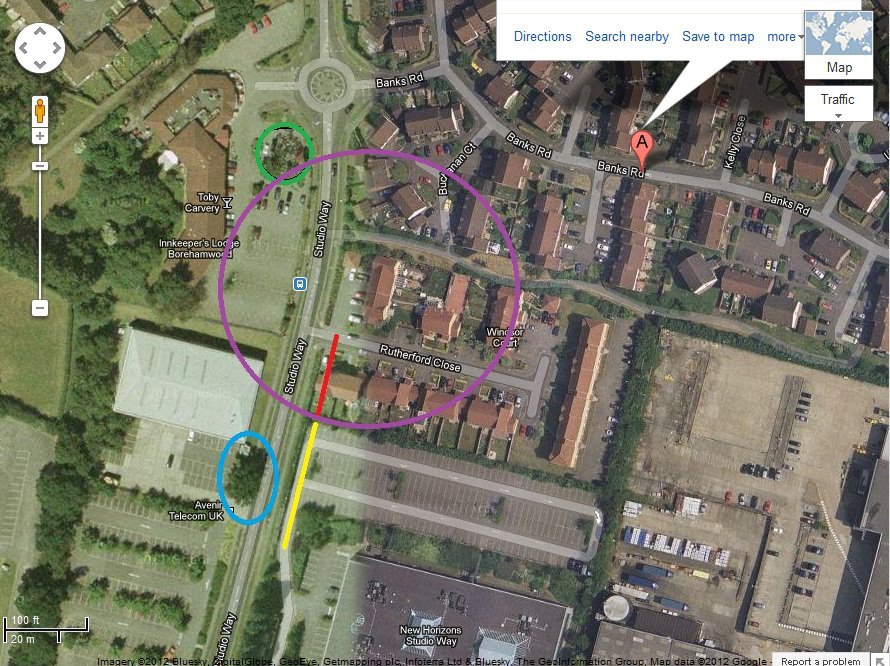 So there we have it, the tree no longer stands but the location is confirmed! The tree which stood in the TOBY Car Park (off Studio Way) until 2019 can be seen in the episode as follows; 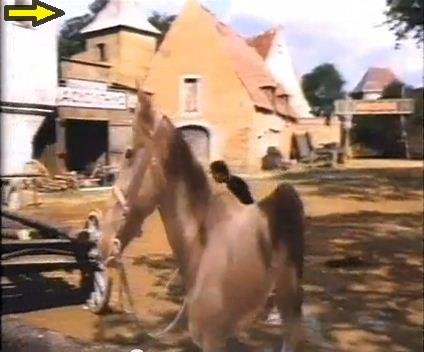 Kieran has done other research, utilising aerial shots provided to the Facebook group, regarding the MGM backlot which can be read HERE.

As mentioned above, the tree which still stood was sadly cut down in 2019, as this photo provided by Ray Warren testifies: 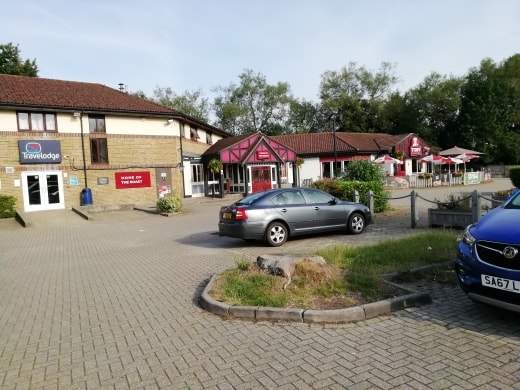 READ BELOW THE HISTORY OF THE DEBATE WITH ALL THE RUMOURS AND DIFFERENT TREES AND EVIDENCE:

UPDATE/RUMOUR 1: The image below shows a tree in Niven Close, Borehamwood, which bears a striking resemblance to the one seen in the episode, and also fits in with a tree alignment seen in an aerial photograph from the late 1960s. 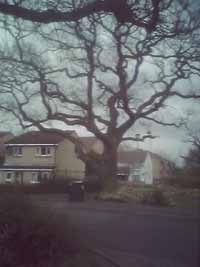 UPDATE 2: Sam Denham has since returned to the site, and unfortunately has come to the conclusion that the Harmony tree, in fact, no longer exists. Sam writes: It is on the corner of Studio Way and Rutherford Close. Took another trip up there and sadly the trees are no longer there. The ones we were looking at are in a very similar row, but to the north of the backlot area. The village of Witchwood and the Paris streets are now where Banks Road meets Kelly Court and Hay Close. The Dirty Dozen French Chateau is now under a large grassy mound".

UPDATE 3: CH writes: However, on my recent visit, I spent hours looking at all possible remaining trees, their positioning relative to each other, and the ‘look’ of them in comparison to stills from the series. This involved looking into many back gardens over fences! My main source of reference was an old photo, which shows the whole backlot, along with the sound stages, the clocktower building & the main road (Elstree Way).

By measuring the length of the clocktower access road (York Way) and given that Studio Way starts - that same length again down Elstree Way, I can draw the path of Studio Way on the 60’s photo. This road climbs the hill at a right angle to Elstree Way, and the original line of trees is still present to the left. The track that used to run from the edge of the sound stages, to Harmony runs more or less parallel to Elstree Way, and I can’t help but assume that it wouldn’t have been built on the hill, but at the top. The photo strengthens this theory (it’s impossible to see the gradient in the photo), and assuming that the track was built at the top of the hill, this would have run where there is now the dividing line between industrial buildings and the Toby pub.

There is a surviving tree about ¾ of the way up the hill of Studio Way, on the left of the road. This position corresponds with the tree just above the grey box in the photo. The 3 trees to the right of this tree (in a line) later become part of the Harmony set - with only the 2 right hand trees the ones seen in the episode. So . . . . . carrying on up Studio Way I came to another tree – in line with the previous one . . . . . right in the middle of the pub car park. So . . . . . this must be one of the Harmony trees. It is too far away from the previous one, to be No1 tree. Is it No2 or No3? (No3 being the hanging tree, and the one we see much more of.) On close inspection, comparing the structure of the branches with photos, it has to be No3. I am aware that 40 years has passed ( and it’s not looking too healthy nowadays), but the main branches and the angles that they come out at won’t have changed. It also leans slightly, which No3 does on inspection of the DVD. And there is a branch cut off at about head height, as it is in the episode.

Therefore, the most important tree on the backlot for Prisoner fans still remains. I estimate from the photo that around half of the trees were cut down. Having said that, this famous tree is not in wonderful shape – a few branches are dead. 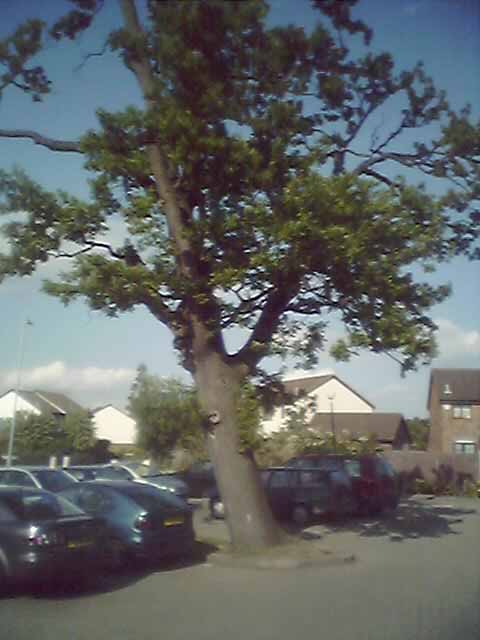 I sat outside the pub with a drink and it struck me that the tree’s current surroundings aren’t that dissimilar now from what they were 40 years ago – a sort of courtyard feel with the tree in the middle. The pub may now be on the opposite side than the Silver Dollar, but the music that was drifting out of the pub to me on that hot summer’s day is only the modern alternative of the familiar Harmony piano. It was a little spooky.

Another thought is - had the studio not been sold and demolished, none of us would be able to discover and walk around Harmony as freely as I did.

Update December 2007: Thanks to Tony Mckay of Avengerland, the following images seem to confirm that the tree in the Toby car-park is the correct one: 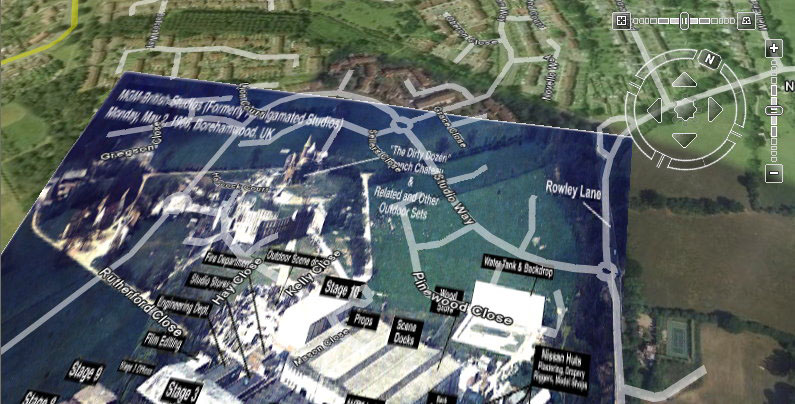 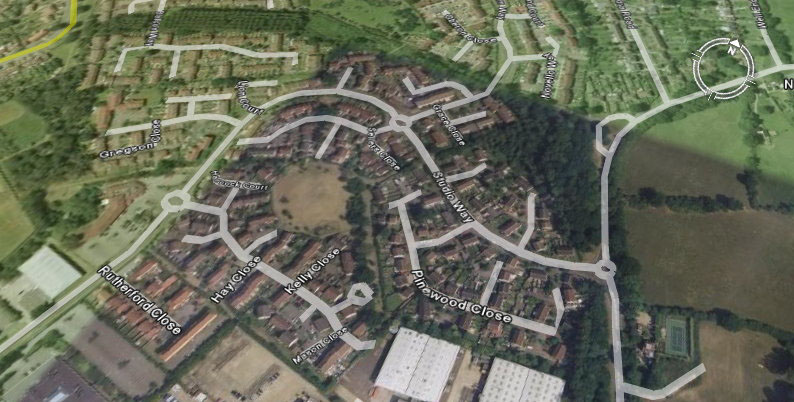 Update Feb 2008: Thanks to diligent research from Sam Denham in 2008, kindly passed on by Tony McKay, it appears now that the tree may not now be the one found at the Toby Inn, but accross the road!

Following the publication of the above images, a TUW reader has submitted the following to the discussion; "I was never convinced that was the Harmony tree, I used to stop over at the site for lunch when it was being redeveloped into houses and often parked up at what i thought was the tree in question. At that stage all the trees were numbered for the chop, one particular day a bulldozer scooped the area and brought up loads of what looked like pantiles, on closer examination these were fibre glass looking things poss from the Harmony set, I think the Harmony trees may be long gone if they were the numbered ones....shame."

And then we reach July 2012 where the Toby tree is proven to be the one which can be seen above the Harmony Blacksmith's shop, and the hanging tree proven to have been cut down when the estate and Rutherford Close was built (see above for images of the location).

For more images of the MGM backlot and how it looks today, click HERE.

Click here to return to the Unmutual Locations Guide