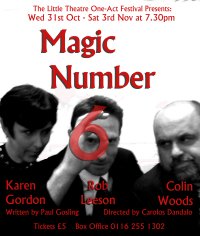 'Magic Number Six' is a play based on the meetings betwen Lew Grade and Patrick McGoohan before and during the making of 'The Prisoner' in 1966/67. I caught up with writer and producer Paul Gosling. The interview began with me asking Paul about his background and how he came to the point of writing the play.

PG: I am from the generation who first saw The Prisoner in the 1980s on Channel 4, we were the first generation to be able to videotape the show and it had a big impact on me. I revisited the show when it was released on DVD and ITV4 also re-showed it in recent years and I'd always kept the series in my mind. I am also a fan of other shows of that era such as the Supermarionation series' by Gerry Anderson, and "The Avengers" and "The Saint", so I felt that there was a social crossover between these shows and wanted to cover that. So although the play will appeal to "Prisoner" and Patrick McGoohan fans it will hopefully appeal to fans of all those types of shows.

RD : Was it difficult to write or prepare the screenplay?

PG : I had read Rupert Booth's excellent biography of Patrick McGoohan (available HERE) and there were lots of things I wasn't previously aware of, so that gave me some food for thought. It was very easy as a writer, I wrote the first draft over a period of 3 days and then it was just a case of a few tweaks and re-drafts. It runs for around 1 hour and is a 3-hander with Patrick McGoohan, Lew Grade, and a fictional PA character.

RD: It is notoriously difficult to portray McGoohan, was the casting process difficult?

PG : The only other one I am aware of is Brian Gorman's play "Everyman", I've been in touch with Brian quite a lot and he has been very supportive. I have an excellent cast, but finding McGoohan was difficult. I didn't want to find someone who was just going to do an impersonation of him as that would be problematic, I can do his voice fairly well and it is my voice on the trailer on the Facebook page for the production, but I am not an actor. In the end I went with someone who makes a very good leading man but isn't going to do impressions. The fictional PA, Karen Gordon, was great when she read for it, and Colin Woods is terrific, I have a terrific cast.

RD: How would you describe the play?

PG: It's a comic piece of work, or rather a light comedy piece even though it is drama, which is for anyone who is interested in the machinations behind all those 1960s TV shows. I've of course tried to get my facts right although not everything in the play is true to life.

RD: I think some artistic license is allowed. Best of luck with the production, I look forward to seeing it, are tickets selling well?

PG: Yes, even though the theatre itself doesn't directly promote these evenings we have by word of mouth already sold 70% of tickets.

RD: Thanks so much for your time. 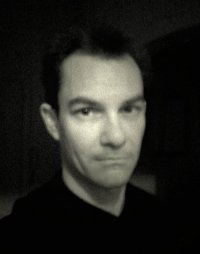