Adapted from an interview conducted by Dave Jones and transcribed by Dave Healey in 1993, with their kind permission. 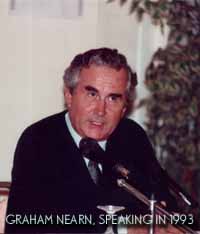 He was asked initially about the company who originated the Seven - Lotus.

GN: The company was formed by a man called Colin Chapman, who died 10 years ago. At the time of his death he had designed and built 91 different sports and racing cars, most notably Formula 1 cars.

DJ: Was the Lotus 7 built originally as a road car or a racing car?

GN: It was always both. It was originally a very light road/race car. It was a car which could be driven on the road, to the circuit, and raced with very little modification.

DJ: When did it first appear?

GN: The original Lotus 7 came out in 1957. So, the car has been continuously in production for 35 years now.

DJ: Were you with the company when it was launched?

DJ: How didMcGoohan choose the car for use in The Prisoner?

GN: I've heard this from Patrick himself He was looking for an individual car - something that portrayed this idea of freedom. The word he used was maverick, which I think describes it quite well; something that, sort of, goes with the herd, but is different and runs along-side when it feels like it. He went to Lotus looking for such a car, because they were very well known for producing individual-type cars. Lotus were at the point of phasing out the Lotus 7 and getting round to doing a deal with me. They were very keen for him to have the Lotus Elan, which at the time, of course, was running in "The Avengers" series. There was no way that Patrick wanted that. He saw the Seven in the yard and said: "That's the car I want."

DJ: The car used in the series was the Lotus demonstrator, wasn't it?

GN: That's correct, it was the original Lotus demonstator. It was used as a press car, for them to test, for photography and that sort of thing. Having done the filming... Patrick then wanted the car back again for use in "Fall Out". By that time Lotus had sold the car... so there was a big panic. "Could we find another car?" So what we did was, we actually came up with a reproduction. So there were actually two cars used in the series. The one used in "Fall Out" is not the original one.

DJ: You had a small cameo role in Fall Out didn't you?

GN: Yes, I suppose you could call it a small cameo role. The idea at the end was that there was a street scene where the Lotus 7 was driven very fast up Bucking-ham Place and screeched to a halt outside the door. The driver at the time couldn't handle it. He could go quickly enough, bu he couldn't stop - he nearly took the cameraman out! So, Patrick got me t drive it. That's how I came to be a film star We did something like an hour's filming - coming up the street, slamming on the brakes, getting out... getting coached fron Patrick on how to act. But in the end they cut it down to, whatever it is, 10 seconds of something.

DJ: Did McGoohan drive the car?

DJ: Was he a good driver?

GN: Oh yes, he was a natural at pretty well everything he did.

DJ: Now you have come out with the Caterham 7 - Prisoner Series. How dia that come about?

GN: We've always been associated with "The Prisoner" series. If you ask people why they are buying a Seven they say: "Oh, I remember seeing it in the television series." So, I had the idea of bringing out a limited edition, which manufacturers tend to do. So, I spent about a year tracking down Patrick. He seemed to move agents a little bit. It's very difficult when you are phoning Los Angeles because you get a big time difference. But eventually I spoke to an agent and he said: "Gee, I understand, but that's a big hot potato for me - you'd better speak to the man himself". So, I got Patrick's number and telephoned him.

DJ: Did he approve or did he take some persuading?

GN: No, he was very enthusiastic about the car. I think the words he used were that "it's faster than a Maserati and quicker round corners than a Ferrari," and that kind of thing.

DJ: Is it in production or are they made to order?

GN: They are made to order. Patrick came over to the Motor Show in 1990, which was the first time he'd been back to England since the series. It was quite an emotional moment for him. I thought all I'd have to do was say: "Come up on stage." He was very nervous about the whole thing. I think, and this is only a personal opinion, that being an actor he can act, but he doesn't like to ad-lib. I did actually have the "Wogan" programme on saying: "Could I get McGoohan on the programme. I said: "Well, I might be able to, but you've got to have me and the car." They said "OK." Patrick wouldn't do it. He did marvellous when he came up to the [Motor] Show for us.

DJ: The Seven is still available. Can you give us a price?

GN: We do a very basic, sort of kit model, for around £7,500. But if you want this reproduction car, which has got to have the right hood, the right colour, the right interior and a respectful performing engine, plus the endorsement from Patrick, of course, you're looking at around £ 15,000.

DJ: That's pre-built of course. What size engine is it?

DJ: What's the top of the range?

DJ: How many Prisoner specials have been sold?

DJ: Are they all to Prisoner fans?

GN: Yes, I would say they are.

DJ: Is it true that you gave Patrick a limited edition Seven?

For more information on the Lotus 7, and all the other vehicles that appeared in "The Prisoner", visit our Prisoner Vehicle Guide.