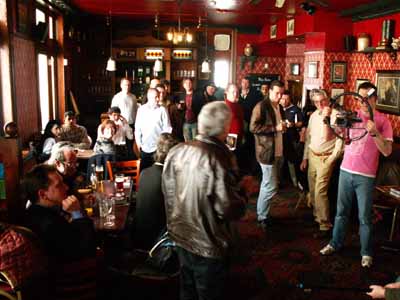 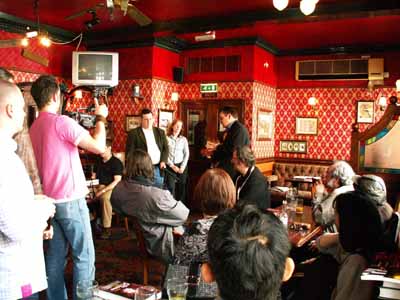 Anyone owning the first volume of Prisoner scripts will be aware of the quality of work and effort that author Rob Fairclough placed into this weighty tome. The first volume, released in 2005, was accompanied by a launch party in London, and to welcome this latest addition to the Prisoner portfolio, publishers Reynolds and Hearn did a “Schizoid Man” and repeated the successful launch of the earlier edition.

Revisiting the Bath House Pub on the edge of Soho, the publishers and author were joined not only by about 30 aficionados but also by "Prisoner" Film Librarian Tony Sloman, film & music editior John Smith, 2nd Unit Continuity girl Renee Glynne (attending her first ever "Prisoner" event), and Ian Rakoff, who contributed substantially to the episode "Living in Harmony". A number of other guests had to send apologies, however those present provided more than enough anecdotes as to their respective contributions to the making of "The Prisoner" and were quite happy to chat and sign books. 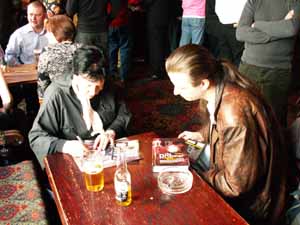 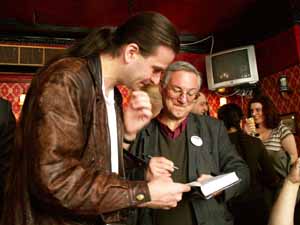 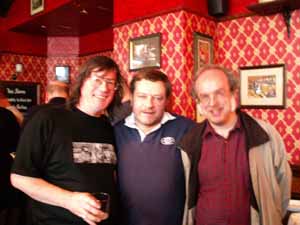 An attempt by Howard Foy to be the person travelling the longest distance to attend the launch was usurped by a fellow enthusiast who had not so much travelled from New York, more delayed her flight home. Also present were fans from other parts of the UK, and a film crew recording the event. Very welcome they all were! 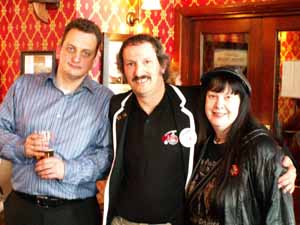 Without putting too fine a point of it, the book is an excellent and worthy contribution to a select list of publications that really add to our knowledge of "The Prisoner" and thanks must go to Robert Fairclough, Henry Holland, and publishers Reynolds and Hearn for their hospitality and inviting fans through the The Unmutual Website to this thoroughly enjoyable event. 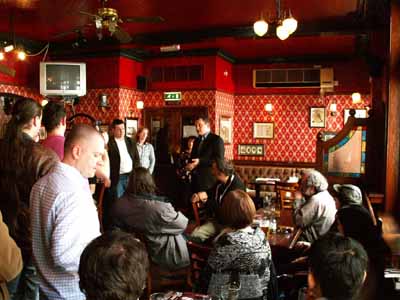 What next? Well, unless someone discovers nine lost episodes filmed and then forgotten, or failing that another batch of unused scripts (both of which are just dreams!), there will be no volume 3, so that’s that. Wait a minute.....I’m sure I heard Rob Fairclough mention something about "Danger Man" scripts.

Having convened at 1.00pm, by 6.00pm people were making there way home, or off for pancakes and drinks in the Holborn area. By total fluke or chaos theory, whatever you subscribe to, the Grand National had commenced with a lot of attention to the eventual winner, a horse named Numbersixvalverde. Spooky!

Visit our reviews section for a review of both volumes of the book.