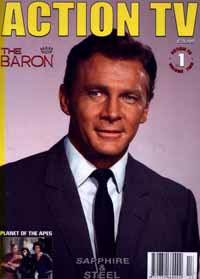 In 2006, shortly following the release of Issue 11 of Action TV magazine, news spread that editor Michael Richardson was thinking about putting an end to the run of magazines, each of which deals with our favourite Sci Fi and Fantasy TV shows.

Fortunately, this thinking did not lead to such an addition and 2007 begins with Volume 2 of the magazine now available with a new distributor, that of http://www.startrader.co.uk

Priced at a very affordable £3.95, Action TV (Volume 2 Issue 1) runs to 40 glossy pages and deals with 3 specific series this time. "The Baron", "Sapphire and Steel", and "Planet of the Apes".

In-depth is a phrase which could only be described as an understatement with regards to the detail given to each of the series in the magazine. Whilst many publications (and even published books) would deal with a little bit of background and perhaps an episode guide, Action TV's articles delve deep into the full production of each and every episode, telling the full story of how the series' were shaped and constructed.

And whilst screen grabs are the in-vogue way of representing articles for many publications, Action TV litters its pages with many unseen behind-the-scenes production stills. You also get a handy episode guide for each series.

Dealing with the specifics of this issue, "Planet of the Apes" is a series little covered by publications in the UK (often preferring to concentrate on the film franchise) so it was a pleasure to be able to read an in-depth story of how the series came about. Being an ITC-favourite, "The Baron" is perhaps more commonly seen in magazines, but still not to anywhere near this detail, and this is only part 1 of a 2-part feature! The "Sapphire and Steel" section (following on from the previous issue) is also a joy to read, penned by Andrew Screen.

If you haven't done so already, do consider a subscription to Action TV - you won't regret it.