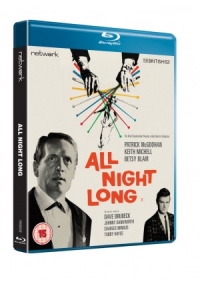 2016 has seen yet another treat from Network for fans of the film work of Patrick McGoohan, with the July release, on both DVD and Blu-ray, of the 1961 Basil Dearden-directed 'Jazz Othello' movie 'All Night Long'.

And what a treat it is, as Network have gone back to the original film elements and done a superb job of mastering this film, which seems to me to be pretty 'unimprovable' now (other than some sort of 4k mastery) and they, as always, must be congratulated for a wonderful presentation of this classic movie.

The disc is accompanied by an excellent research piece by Neil Sinyard, who has provided an interesting and unrivalled summary of what is known about this film.

All in all it is a first class presentation and a must-have not only for fans of the work of McGoohan, but fans of movies in general. The extras of stills and original trailer are also very welcomed (although if you haven't seen the movie, watch it before watching the trailer as it's one of those which inexplicably has spoilers) and this release comes highly recommended by The Unmutual Website. But what of the film itself?

The Unmutual Reviews: All Night Long, the film Review by Brian Watson

What was PMG was up to in 1961 before "Danger Man", "Dr Syn (Alias 'The Scarecrow')" and "The Prisoner"? I spent Easter Sunday with the answerphone on and the room darkened.

OK, this is familiar ground so far. The elements of the film's opening: are a man gets into a stylish car, a blaring insistent soundtrack plays as the car weaves through the streets of London (cutaway to Big Ben), our man parks the car (he looks determined, purposeful), there is a clap of thunder and a cutaway to the storm clouds, he strides purposefully through a pair of double doors, down a corridor, through more double doors, there is a man sitting ... playing a double bass?! OK, this is black and white and the interior of a jazz club. Still, I'm not pining for Portmeirion yet.

The plot of "All Night Long", directed by Basil Dearden, is based on Shakespeare's "Othello" - a story that McGoohan revisited (but as Director) later in his career in its 1973/74 rock musical film incarnation "Catch My Soul." I've not seen that so can make no comparison, but "All Night Long", I'm pleased to say, does the storytelling very well.

It's very much like a TV play - virtually all set in the jazz club and entirely down to the actors and musicians to make it work. I can't think a lot of money went into its making, though the MU boys would have been playing for a bit more than "scale", I'll bet! McGoohan himself appears to play drums at several points and all I can say is that if he is miming, and I'm really not sure whether or not he is, he makes a damn fine job of it!

The club is hosted by Richard Attenborough's rich-boy jazz fan character Rodney and the set is considerably enlivened by the presence of some jazz greats (Charles Mingus, Dave Brubeck, Tubby Hayes, John Dankworth and their bands) ripping through some pieces of the period.

This time, the Othello plot is told as a black band leader Aurelius Rex (think Duke Ellington and you'll have the idea) being encouraged by McGoohan's character Johnny Cousin(hmm!) to believe that Rex's white - and in 1961 that was still pretty controversial - wife Delia (not Desdemona, as in the original) is having an affair with the band's tour manager/saxophonist Cass, played by Keith Michell.

Johnny Cousin has a rival jazz group to Rex's and he also has big money worries, so he wants Delia to leave her husband, come back to singing, and be Johnny's vocalist.

However, jealousy is wild magic, and Johnny gets it all going on early in the film by getting Cass stoned on pot (ah, these jazz men and their wicked ways...) after which he mouths off in fine style to an agent who is played by Bernard Braden. Rex fires Cass, who is consoled in innocent style by his old friend Delia. Unfortunately, Rex sees this and the seeds of suspicion are sown.

Later, Johnny plants evidence of Cass and Delia' non-existent affair and spreads rumours around the club and then - to finally convince Rex of Delia's infidelity - he does a sneaky cut-and-paste job on a tape recording of a couple of conversations that is then played to Rex. It all looks bad, but the outcome of Johnny's plotting is not quite as he hoped.

I don't propose to give away the denouement, but it works well, and it is good to see evidence that PMG can play a strong character who is nevertheless not centre stage all the time. He is very much one among equals in this and it is good to see an ensemble cast pulling off such a good production despite fairly unremarkable camera work throughout.

This is a very good few quid's worth of anyone's money and would make a good companion piece on your DVD shelving to 1957's "Hell Drivers". I look forward to getting stuck into Patrick McGoohan's even earlier work "Brand" next.

Additional info from from TUW reader Scott Wurcer: Look out for McGoohan uttering "Be seeing you" somewhere near the beginning.

Click HERE for the full Network press release, HERE for a clip on youtube, and HERE for the main Network On Air website to pre-order your copy. All Night Long mentioned in Film Noir article HERE.