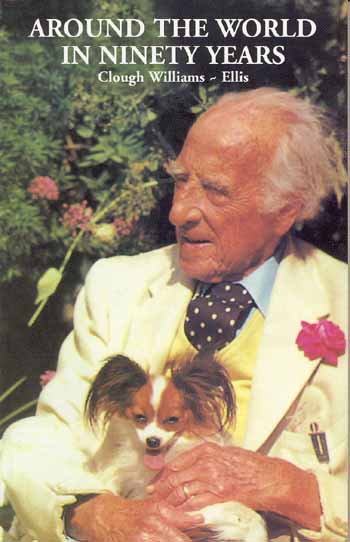 Portmeirion creator, Sir Clough Williams-Ellis, was also a writer of some note. His first stab at autobiography, "The Architect", was published as early as 1928. This work was superseded in 1971 by the updated "Architect Errant", which was reissued in 1991 by Portmeirion's own Golden Dragon Books and is still available. He concluded, however, that the post war period, glossed over in a mere 30 pages of "Architect Errant" deserved fuller attention and set about doing so in "Around The World In Ninety Years". Originally published in 1978, the year of his death at the grand age of 94, the volume was a fitting tribute to a true eccentric - and genius.

Now reprinted, again by Golden Dragon Books, it provides a fascinating insight into the life and work of a genuinely contented man, whose life with the fulfilment of his dream, Portmeirion, was satisfyingly complete.
Confessing to a poor memory, Sir Clough presents a series of subject driven essays rather than the traditional chronological account of his life. His overwhelming love of his chosen profession is evident throughout the text detailing his travels. In an endearingly old fashioned style he depicts a lifestyle now all but extinct in this clinical and cynical age. His brushes with royalty and the aristocracy speak volumes for the respect with which he was held by all those who met him during his long and productive life. A mixture of architectural philosophy and amusing (and often self-depreciating anecdotes) this book offers a fascinating insight into a man whose achievements, enthusiasm and outlook on life cannot be faulted.