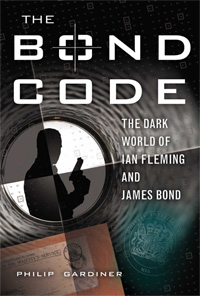 There have been many books written about James Bond over the years, I confess all of which have passed me by as I am not a huge fan of Bond (although like to watch the films now and again), but the latest, by Philip Gadiner, caught my eye as it features a chapter on "The Prisoner".

Rather than a production resume of the Bond films, or a simple biography of its writer/creator Ian Fleming, "The Bond Code" is a decipher of codes and links which Fleming apprently hid in his novels, and things from his life which can be connected to them, and thus makes this book a different and interesting tome, for fans and non-fans alike.

The problem with a lot of books which deal with theory is that little can be proven, especially with Fleming no longer alive, but in this case the author does put forward some interesting theories which certainly do fit, and backs them up with good research and evidence. Not being an expert on Bond it's difficult for this reviewer to pick holes in what was written, and on top of that I didn't get bored so perhaps the author and publisher has got the balance just about right in that such a book needs to appeal to a wider range of customer than just pure Flemingphiles and it certainly did enough to keep me interested throughout.

However, some of the facts and apparent influences upon Fleming are in some cases a little obvious (such as the section on the occult), and in others do not really need to be told, but there is certainly enough here to make even the most ardent Bond fan sit up and think "I never thought of it like that, well spotted!".

As mentioned above, there is a section on "The Prisoner" and "Danger Man" and perhaps here I might be reasonably qualified to see if the author "knows his stuff", being a secondary interest i'm sure, as compared to Bond, for him.

Although a short chapter, it is well written (always difficult to explain the series, and Danger Man with it as well as McGoohan as a man) in a short amount of space, but even so there are a few sentences which make little sense, for example "In the end Number Six escapes with each character of Number Two, which are elements of himself he cannot leave behind." and "This is an otherworldly experience, accessed in dream. It is infact taking Dangerman/McGoohan into himself to purge him of all that is wrong in his life". It seems strange that on one hand the author concedes that McGoohan has always been tight lipped about the true meanings of the series, and that it is open to interpretation, but then states things such as the above as fact, when they are simply the author's opinion. This comes to afore when Gardiner recounts the opening sequence, stating that the "You.....are Number Six" line actually means "YOU are, Number Six" (IE "you are Number One") when as we all know, the emphasis is never phrased in that way at all and was never intended to be.

This does make me wonder if the same is true of the rest of the book and does cast a doubt for this reviewer as to what is fact and what is just a loose collection of things that the author has spun together, as has been done before with "The Prisoner", of course.

It is very true, however, that Danger Man and The Prisoner both used elements of Bond in it's lead characters and storylines, and cannot be denied. However, I was flummoxed by the statement "McGoohan was asked to play Bond, but refused, saying only that he could not associate with one of the people on the team". If there is a fact this reviewer doesn't know, I humbly apologise to the author, but I believed it was common knowledge that McGoohan refused Bond on moral principles (IE he would not portray a gun-toting womaniser, the 2 main traits of Bond) and, as we know, McGoohan prided himself of John Drake being "the secret agent with no gun, and no girls". I was then amazed with "McGoohan has never denied the claim that Number 6 was a parody of Bond". He has never denied that Number 6 was a parody of Baron Frankenstein either, but that doesn't mean he was. I think the author here is perhaps over-egging the importance of Bond. Sure, the gadgets and so on in Danger Man certainly may have been inspired, but i'd like to credit McGoohan/Markstein with a little more genius than "The Prisoner" simply being "James Bond with no name in a weird village".

However, I am being picky with just 2 paragraphs, and the rest of the "Prisoner" section is well paced and written, and has a good summing up of the overall "meaning" of the series, and has perhaps the book's most interesting fact - Ian Fleming for a time lived next door to Clough Williams-Ellis' London studio. Well, I never knew that!

So, in summary, the author lets himself down a couple of times, but this book is still a very interesting read and certainly makes you think, which one could argue is the whole point. It's a little heavy going in places (but then so it could be said was Fleming), but there are some delightful chapters (such as the events on the author's holiday which led him to find an unexpected Fleming connection) and overall is a good read.

The text size is large and the book runs to 256 pages, with many (black and white and not superb quality) photographs, so it's not that extensive, but at $16.99 (about £8) is good value and won't leave too many readers disappointed.

With thanks to New Page Books for their help and the review copy.