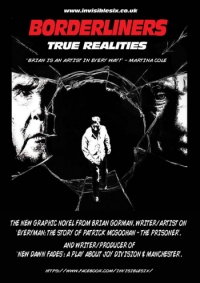 Brian Gorman's pedigree in terms of content which fans of 'The Prisoner' would enjoy is almost unrivalled, with the previous offering of 'Everyman - The Story of Patrick McGoohan - The Prisoner' in the forms of both stage play and graphic novel highly recommended and well received (reviews HERE).

It is therefore with much anticipation I awaited the arrival of the 'new' version of his graphic novel 'Borderliners - True Realities'. I say 'new', because many moons ago, long before Brian became known for his love of 'The Prisoner' and Patrick McGoohan, I purchased myself the original Unico Comics release of 'Borderliners - Ceremony of Innocence' as to me, it simply looked interesting.

I was as right then, as I am right now. 'Borderliners - True Realities' is a first class piece of work.

The artwork, as you would expect from Brian, is first rate, but let's be honest you wouldn't be considering 'Borderliners' JUST to admire Brian's artwork (it helps, of course, and at no point did I think 'that's a messy one'). There's some great characterisations, both in terms of image and also character, including Brian himself, but also Sirs Roger Moore, and Ian McKellen, who both gave their permission for their likenesses to be used, and both of whom look great, thanks to Brian's talent (I particularly enjoyed Moore's character).

There are many Prisoneresque elements within the story, but even if you don't spot those there's more then enough to keep you reading (and keep you it will, I defy anyone to put this down before reaching the end). It's a dark and cautionary tale, a real 'brain challenger' as I would call it, in that it requires some thought, thought which you'll be rewarded for having. There's also a great deal of humour (I'm almost not sure why but the 'garlic sauce' page had me tittering away on the train, much to the bemusement of other passengers, I'm sure). There's also a lovely little bonus of a tongue-in-cheek 'behind the scenes' section at the rear, and a very interesting and in-depth interview with Brian.

'Borderliners - True Realities' is Brian's own 'Prisoner', his own personal tale of warning to tell, and like McGoohan's creation beforehand, Brian's latest work creates more questions than answers, yet entertains along the way, in the same way that, for me, 'The Prisoner' always did. As with 'The Prisoner', 'Borderliners' could have been an exercise in self-indulgance, but yet isn't, and Brian's personal tale, which represents a look at the wider realities of existance through the story of one man (just like 'The Prisoner', you're getting a theme here with this review, right?) is fantastically weird, but yet so weird that I (in my own mind at least) totally 'got it'. Others may 'get it' in a totally different way to how I felt, but that's fine, and the whole point. But rest assured one thing you won't 'get' is any feeling of regret at having purchased this unique Prisoneresque piece of work. 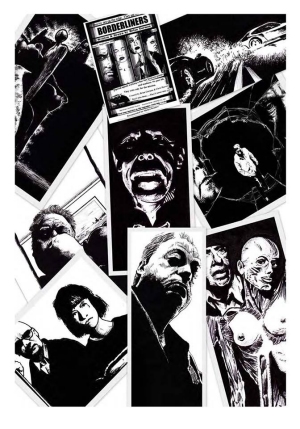