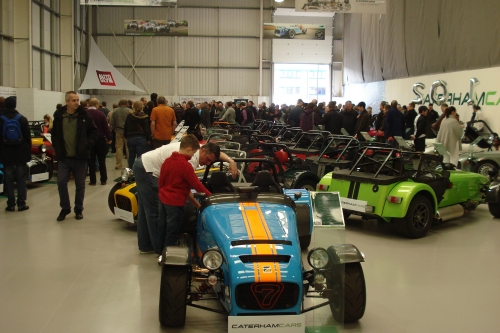 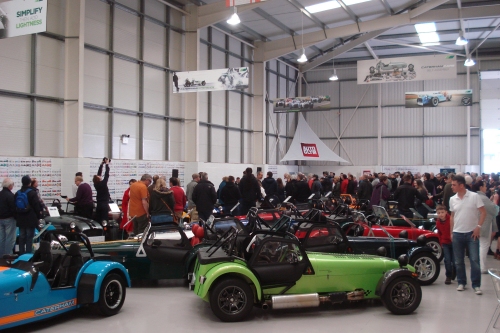 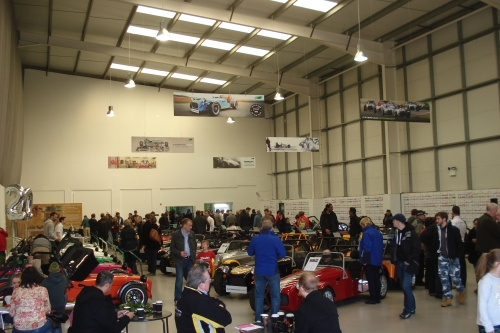 As readers may know, the old showroom site in Caterham closed a couple of years ago. Caterham Cars are now established in an industrial complex in Crawley which is relatively close to Gatwick airport.

Proceedings began at 9AM with stands providing fresh coffee and cooked butties.

The CEO of Caterham Cars, Graham McDonald was present to introduce the new 2015 range of Seven models and this was followed by the official opening of the showroom by Mike Gascoyne, the ex Formula 1 Technical Director who has worked for several Grand Prix teams including McLaren, Sauber, Tyrrell, Jordan, Renault, Toyota and Spyker (later known as Force India) before he moved to the Caterham F1 team in 2009. He gave a talk on the innovation of an F1 car followed by a Q&A session.

For the kids, there was an Easter Egg hunt and the judging results of a painting competition by the artist, Ian Cooke of PopBang Colour.

The whole site was open to Caterham Seven owners and motorsport enthusiasts including the workshops. There was also an exclusive Caterham spare parts sale and the Caterham pit stop wheel change challenge which provided a lot of fun and laughter.

In the reception area there is a photo montage of key events of the evolution of the Lotus 7. There is one section with a picture of Patrick McGoohan and Graham Nearn from the Buckingham Place location with a brief explanation of the importance of the Prisoner to the popularity of the car.

The event finished at 1PM.

Overall a great day out!!