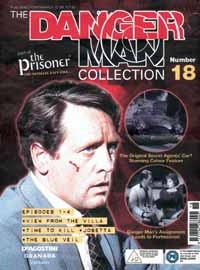 In the week beginning 7th August 2005, "The Prisoner: The Official Fact Files" partwork ceases publication and from issue 18 becomes "The Danger Man Collection".

I must admit that I was concerned that trying to keep the highly successful (and highly recommended) partwork magazine running to cover all the episodes of "Danger Man" would ultimately lead to a dilution of information, as the series is not as well known and researched as "The Prisoner". If the first issue of the "Danger Man Collection" is anything to go by, I couldn't have been more wrong.

The format of the "Danger Man" magazine is the same as the "Prisoner" magazine (if it aint broke, don't fix it) with full colour throughout, extensive information about each episode and the cast and crew, packed with images, and an accompanying DVD.

The first issue deals with the first 4 episodes, complete with a DVD of all 4. "View from the Villa" (which features Portmeirion), "Time to Kill", the suberb "Josetta", and "The Blue Veil" all go under the microscope, including extensive production notes for each episode. The format of 4 episodes per DVD/Magazine will continue throughout the half-hour "Danger Man" series, before moving to 2 per DVD/magazine with the hour-long episodes - the first time these episodes will have been available in the UK!

Also included in the first issue are features on the character of John Drake, the location of Portmeirion, John Drake's Aston Martin car, the history of ITV, plus an extensive look at the gadgets and guns!

Thanks to Rob Fairclough, I have also been treated to a viewing of Issue 23 and the quality has not diminished at all. I can thoroughly recommend people subscribe to "The Danger Man Collection" - never has so much detailed information and rare images for the series been available. Go to the Deagostini website for subscription details. Subscribers to the Prisoner partwork will have their subscription automatically continued to include the new collection. More information on Popco can be found HERE.

With thanks to Robert Fairclough for the review copies and cover image.