The Unmutual Reviews: Decoding The Prisoner. Review by Peter Dunn. 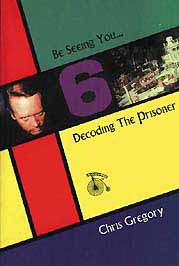 DECODING THE PRISONER is too grand a claim for this book. Describing "The Prisoner" would be a more accurate title for this 228 pages of missed opportunity. For over thirty years we fans have done much that must irritate McGoohan, "The Prisoner"'s creator. Some have dressed in silly costumes, some have recreated scenes, we have made and bought Prisoner merchandise that sometimes has to been seen to be believed... but at least we honoured McGoohan's key hope for the series. We have used the series to think a little more about ourselves and the world around us. We have even shared those thoughts with other fans and viewers in discussion groups, fanzines, television and radio interviews. In fact few other telefantasy series have produced such a depth and range of philosophical thought among its fans.

We have not been arrogant about those thoughts. We range across a wide variety of professions from bus driver to biologist - and few if any of us are professional thinkers. For the most part we have been gentle with each other in our debate about the series message - hidden or otherwise. We always knew that at some point a trained academic mind would bring its finely honed skills to the seventeen episodes we love and provide either new insights or at least a more ordered or codified analysis of some of the aspects of the show than we have been able to produce to date.

This book, the first on "The Prisoner" from a UK university press, could have been that academic analysis. Sadly it is truly disappointing. The book's author Chris Gregory spends a whole chapter pointing out the affect of the creation of the video recorder on our perception of "The Prisoner". Later he also points out his belief that "the role of the VCR in the creation of 'cult' series has been crucial". Almost all of us now have the means to watch and re-watch the show, pausing and rewinding over crucial moments at will. That being the case why then does he waste 122 pages of his book to present us with a pointlessly detailed blow by blow account of each episode? I purchased this book for the same reasons as most people will - as someone who has seen the show and who is interested in getting an academic viewpoint on the philosophical and/or allegorical content of the series. I did not want a yet another dreary episode guide.

Sadly I have to accept the author's statement that "this book... could never have been written in this form without the use of a VCR". I can just picture the author sitting down to wind and rewind through a pile of "Prisoner" tapes and faithfully transcribing what he saw - perhaps he should have got more. In particular he should have left down his video remote and gone to interview some of the writers, actors, producers and directors of the series.

How can you possibly claim to be seriously attempting to 'decode' a show without ever taking the opportunity to speak to those who produced the original coding? It is perhaps understandable that he did not try to speak to McGoohan - given McGoohan's renowned prized privacy - but it is unforgivable that he should not have spoken to any of the other writers or directors. Not only does this deny us as readers access to their crucial thoughts on the process it also leads the author of this book to replace those thoughts with his own embarrassing incorrect speculations on those writers' thinking. To give just one example Chris Gregory suggests that the episode "A Change of Mind" in his words:

"recalls Ken Kesey's allegorical novel One Flew Over the Cuckoo's Nest (1962).... The novel is an important pre-cursor - and quite possibly a direct influence - on The Prisoner".

Of course those of us who had the privilege of listen to the writer of the episode "A Change of Mind", Roger Parkes, interviewed were able to hear Roger to explicitly refute that "One Flew Over The Cuckoos Nest" was not an influence on the script and in fact the main influence was the brainwashing classic "The Manchurian Candidate". Chris Gregory could have had the same privilege of asking that question had he got up from his pile of videos and simply made contact with Roger.

One could go on to list the many other mistakes in the book, mis-spelt character names etc. but that would be an uncharitable act that would show us up as pedantic fans quibbling over minor detail. So instead I will just list one of the more enormous howlers made by the author:

"The only recurring character is Number 2." (Page 43) Err? what about the Butler and the Supervisor?

The book also has a number of embarrassing omissions which one can only put down to lack of research, particularly a lack of writer interviews as we have already seen. On page 124 the author is puzzled by why "It's Your Funeral" is such a "light weight" episode - but fails to explain to readers that this is probably related to the widely known fact that it was a patch work episode made to a significant degree out of what was till then unused spare footage. On page 142 the author is again critical of the episode "Do Not Forsake Me Oh My Darling" but he fails to analyse in any way how the episode changed from its very different early script treatment "Face Unknown". One has to wonder if the author even knew of the existence of "Face Unknown" or had read any of the many publications on the series that have referred to it.

One of the most irritating omissions resulting from a lack of research is a section of the book entitled "Never Trust a Woman" which attempts to discuss "Sexuality and Gender Relations in The Pris oner". Astoundingly the author manages to produce an entire chapter on the subject without once referring to any interview with any female actress from the show. It has been well established now in interview after interview that many of the female cast and crew found McGoohan unusually difficult to work with probably because they were women. Such a fact is crucial to any gendered understanding of the show - though not once is it referred to - again this shows an over-reliance on the VCR and a failure to interview key players in the creation in the series.

Television fans are often criticised by society for attempting to read too much into the series they love. Thankfully most "Prisoner" fans no longer do this on the whole. Thirty years of analysis of "The Prisoner" has revealed its many flaws and weaknesses, its cobbled together last minute ending, its continuity errors etc.
Still we love it for what it is and we have no illusions as to its limitations. Few for instance would argue that the seventeen episodes present some sort of consistent overall allegorical message that had been worked out from the beginning, rather than it simply being a useful allegorical vehicle for the random thoughts of McGoohan, Markstein, and the other writers, producers and directors. Surprisingly however Chris Gregory appears to still cling to the view that "The Prisoner" was following some vast detailed allegorical plan. On page 91 he refers to the "overall allegorical design of the series" on page 140 he claims that:

"The final episodes complete the mythological `inner journey' of the series passing through what Joseph Campbell identifies as the final archetypal stage of `Return', in which the mythical hero triumphs over his `supernatural' enemies and returns to spiritually `enlighten' his society."

That is strange. I always thought the last four episodes were a cowboy romp, an Avengers pastiche, one really thought-provoking episode, and a final hodge podge of ideas flung together by McGoohan whilst he was tired and emotional.

Does Chris Gregory finally decode "The Prisoner"? Well he does present a point of view in what little space remains to him after his tedious descriptions of each episode. He argues that the series is a warning against society's suppression of the `free spirit' and: "that modem `mass media culture' will produce a `soulless' society". Those who know me well will know that I would disagree with his analysis. Just as I would equally disagree with his analysis on page 172 that the figure of Number 1 in "Fall Out" in his words "on one level is an obvious personification of God". I take the view that the series warns that the most dangerous figure we often face is ourselves - or at least our own evil (or if you want sinful) side and that Number 1 is a depiction of that dangerous part of our own individuality - we are our own prisoners.

Still this is just a point a view and I cannot criticise Chris Gregory for having a different one to mine. However what I can take him to task for is for making me trudge through such a disappointing text in search of his viewpoint. Maybe we will have to await a more academically rigorous work than one from the University of Luton - one of the UK's somewhat less prestigious universities or perhaps the thirty years of fan thought on the series has not done such a bad job after all.