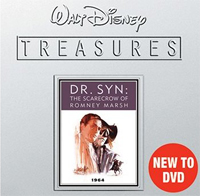 In 1963, Patrick McGoohan starred in an elaborate, full-color adventure for Disney filmed on location in the south of England. The result aired in the USA in February 1964 on Disney's Wonderful World of Color for three episodes as The Scarecrow of Romney Marsh. (This initial screening had the misfortune of losing most of the younger viewing audience on those nights to the Beatles' first three appearances on The Ed Sullivan Show!) Later, a theatrical version combining the three episodes was released in the UK as Dr. Syn, Alias the Scarecrow.

The story is a grand adventure, set in 1775, that taps into the spirit of Zorro and Robin Hood, along with the imagery of The Legend of Sleepy Hollow. McGoohan portrays Dr. Christopher Syn, the kind-hearted vicar of Dymchurch by day, who disguises himself as the fiendish Scarecrow by night. The rousing theme song, a great heroic ballad, describes him "with his clothes all torn and tattered" as he rides on horseback "from the marsh to the coast like a demon ghost." In reality, the Scarecrow is not as fearsome as his legend makes him out to be. Like Robin Hood, he steals from the King to help the heavily-taxed citizens of the parish. Throughout their adventures, the Scarecrow and his team, Hellspite (George Cole) and Curlew (Sean Scully), manage to keep one step ahead of the perpetually frustrated General Pugh (Geoffrey Keen) who is intent on capturing the rogues. One of the series' highlights comes in the third episode. It contains a wonderfully suspenseful sequence in which the Scarecrow (unmasked) and his crew attempt to free prisoners from the local general's garrison.

Despite being a well-made production fondly remembered by fans, Dr. Syn/The Scarecrow has had a checkered history on TV and home video. For over four decades, it has never been easily available to viewers. Disney released the theatrical version on VHS in 1986. By the early-2000s, out-of-print copies of this tape were selling for $100-200 on eBay. Meanwhile, the three episodes of the American version were periodically rerun throughout the seventies and eighties, eventually showing up on the Disney Channel itself by the nineties. The picture quality of these broadcast copies was somewhat dark and grainy. One would think that with all the financial resources Disney has, they would have shown better quality prints. Regardless, the inferior picture quality did not stop bootleggers from manufacturing homemade DVD's and selling them online by the mid-2000s.

In 2004, Disney announced that Dr. Syn/The Scarecrow would be released on DVD that year. Fans rejoiced. The title immediately shot to the top of Amazon's pre-order list, proving that interest was still very high for McGoohan's series. However, the release was not to be. Disney quickly cancelled the DVD before it went into production, leaving fans wondering what happened. Upon seeing the surge of anticipation for the release, Disney must have realized that more effort should go into the presentation of the set. Apparently, they wanted to do it right the first time.

It would take them four years. Finally, on November 11, 2008, the Region 1 DVD came out. The series is now called Dr. Syn: The Scarecrow of Romney Marsh (neatly combining the British and American titles), and no expense was spared to make this one of the best DVD releases of the year. The set is comprised of two discs in a plastic double case that comes in a nice silver tin. Extras include a sepia-tinted lobby card of McGoohan as Dr. Syn, a numbered certificate-of-authenticity, and two booklets: one discussing Dr. Syn/The Scarecrow, and the other listing various Disney DVD/Blu-Ray titles.

Disc One contains the three TV episodes exactly as they aired in 1964, but with one welcome change -- the show has been digitally remastered in widescreen. It looks stunning. This letterbox presentation is a nice bonus, since the series only aired in full-screen during the original broadcast and subsequent reruns. We're actually seeing more screen image now than what viewers saw in 1964. Also included, are the original episode previews, the Wonderful World of Color title sequence, and introductions and closing comments by Walt Disney. Each of these segments is marked with a chapter-stop, allowing the viewer to skip past them if they wish. (Of note: the episode previews and Walt's intros are "windowboxed" in 4:3 within the widescreen ratio). The total running time for the three uncut episodes is two hours, thirty minutes.

Extras on Disc One include an introduction by film critic Leonard Maltin; a 16-minute documentary, "Dr. Syn: History of The Legend" (which contains new interview segments with Patrick McGoohan); an option between the original monaural audio track or a new 5.1 remastered version (which sounds fantastic); and, finally, widescreen versions of Walt's episode introductions. This last addition is a strange one. Why bother including these segments as an extra, when they could have easily replaced the windowboxed versions at the beginning and endings of the episodes themselves?

Disc Two contains the UK theatrical cut that runs 97 minutes. This version is comprised of the first few scenes of Episode One, most of Episode Two, and just about all of Episode Three. Interestingly, there are a few shots in the UK title sequence that do not appear in the US opening. And strangely, during the theme song, the Scarecrow's laughter is missing from this version! In addition, the ending of the film cuts immediately to standard closing credits with instrumental music. Thus, viewers who are familiar with the US episodes, will find it jarring not to experience the reprise of the familiar Scarecrow title theme/montage at the end. While the theatrical cut is nice to have to compare with the episodes, the three-part televised version is definitely the better of the two. It contains the most footage, along with richer storylines and subplots. The lone extra on the second disc is an 11-minute documentary, "From Burbank to London" that recounts how Walt Disney built a "satellite" studio in England in the 1960s.

Now, to address the one aspect that mars an otherwise perfect DVD: Disney (perhaps wanting to make an instant collectible) only manufactured 39,500 copies of the tin. Since the buyer demand was so high, the initial run sold out within two weeks. As of this writing (February 2009), copies are now going for $60-100 on eBay. Sadly, the "never-easily-available" label still hangs over Dr. Syn/The Scarecrow. If Disney has any sense, they will eventually reissue the set, perhaps without the tin, to make it available to the many fans that missed out on the initial release.

Finally, Patrick McGoohan's interview in the documentary is now especially poignant, as it is his last appearance on camera. It is somewhat ironic that, for a man who avoided interviews, the one appearance he would make in his later years would be for a series that had been exceedingly rare itself. Regardless, it's heartening to be able to see him one last time...

So, despite a criminally low production run, Disney did justice to this fondly remembered series. The DVD set is highly recommended, and well worth searching out.