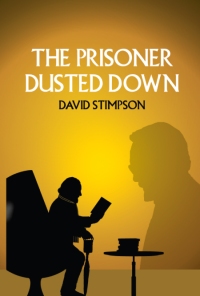 I have settled down to review THE PRISONER DUSTED DOWN by David Stimpson.

Before I get to the book, I have to review the title. It is appropriate. It is brief enough to appear on the cover and is what the author set out to do.

In my mind I had alternative thoughts on a title;

You think you knew the Prisoner – Think again!!!!

How to quench your thirst with sea water.

How to extinguish a fire using only petrol!!!!

Or a line from that spoof soap American series – Confused? You soon will be.

The first important point to make is that you should not be frightened by the book. I am a prolific reader. I do not have a favourite genre. I will read anything. However, I am a 300-page reader. This is a 500-page book and I am a sprinter not a marathon man person when it comes to length of book. I don’t know if this is a common syndrome. If it is and this is you, do not be put off. I have a fear of 500-page books which have 200 pages of padding.

DUSTED DOWN has no padding. It is all meat. It is a fast flowing river from first to last page. You never rest.

I have to be intentionally vague on detail because any slight reference to specific content would be a spoiler alert.

I thought I knew The Prisoner reasonably well. I realised after the first few pages I did not. Having seen it numerous times over 50 years, I now realise how little I have scratched the surface.

I likened DUSTED DOWN to reading Franz Kafka’s Das Schloss [The Castle]. I read The Castle on my brother’s advice annually for several years. On each reading I noticed more hidden meanings which I think the author had inserted subliminally or that I had perceived with no intention by the author to have had any relevance to the story. One has a similar experience from DUSTED DOWN. The book has the ability to make the reader delve much more deeply into the episodes which may have been considered to be of less depth or importance than others. While readers of this review may presume which episodes I am referring to, I am not going to name them. Even this would be a spoiler alert because one cannot assume that we all have the same prejudices or preferences.

The depth of analysis is incredible. I read any spare second I have. On the bus, on the train, coffee breaks at work or having a pint [I have sent the author photographic evidence of this].

I have missed my bus stop on several occasions, having been so engrossed.

DUSTED DOWN makes you think about The Prisoner from a much deeper viewpoint and from a different angle.

You are not just thinking about it from the view point of watching a programme and trying to understand it whilst enjoying it. My subjective opinion is that with THE PRISONER DUSTED DOWN you are trying to place yourself into Patrick McGhooan’s mindset and deciphering how he approached the episode, dialogue, choice of prop, location, in fact every aspect of the writing, filming and editing of a scene or episode.
The author digresses into how dialogue, characters, props and locations fit with matters outside of the series, be it fact, myth or meaning. The author digresses more than Ronnie Corbett in an armchair monologue. You are taken on journeys where you thought the series could never transport you.

I was so enthralled, interested and intrigued that I was drawn to email the author as I read to advise on my thoughts. Most of my comments were to advise that having considered the ? author’s observations, that this had not cleared matters but rather it had caused me to think more deeply about a scene or episode and had caused me to form a different view.

Each chapter is compartmentalised to cause the reader to adopt a fresh mindset and to concentrate the memory on a particular episode.
As I said at the outset, any particular reference to text could be a potential spoiler alert to any reader. This is because if every person in the world read this book, they would approach it from a different angle.

So, has DUSTED DOWN dusted down The Prisoner for me?

What does DUSTED DOWN mean?

To prepare something for use, especially after it has not been used for a long time. To dust off old books to start studying.

As I opened this review, the book is whatever you perceive it to be. It is not possible to give it a title which fits the text and would fit on the cover.
As simply as it can be put, it is a book which makes you think about The Prisoner afresh and from at least one other viewpoint. This is an excellent and incredibly detailed book which is the result of a vast amount of research and effort by an author who knows his subject.
I would advise anybody to read it, even if you have not seen The Prisoner. After one chapter you would watch the series and then read the rest of the book.

One of my best ever reads.