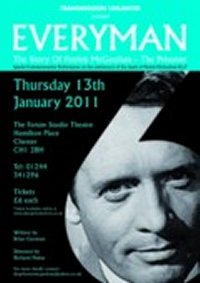 When I was first contacted regarding "Everyman", a two-man show about the life of Patrick McGoohan, I wasn't sure if it could ever work. I was heartened by Brian Watson's review (HERE) of the Lass O Gowrie night, but I was still very unsure. Thursday 13th January 2011 was the evening it would all be put to the test, as myself and my partner (who had never seen The Prisoner or heard of Patrick McGoohan) visited the Forum Studio Theatre in Chester for the first full performance of the play.

The theatre was by no means full, but it was still a good sized crowd, a mixture of local theatre goers and "seasoned" Prisoner fans (I personally knew and recognised at least 6 people out of the countless audience members). The lights went down and the familiar tones of "Age of Elegance" came through the speakers. On stage walked Brian Gorman, whose task it was (and this was put upon himself when the lead actor dropped out of the project several months before) to "become" McGoohan and the Number Six character.

I thought wrong. The answer to all 3 questions in the above paragraph are of course yes, and Brian Gorman thinks so too as he intelligently didn't attempt any of them! He concentrates on the period up to "The Prisoner", and not beyond (the only downside to this is that I was left feeling that we had not had a conclusion to the story), he doesn't attempt to impersonate McGoohan from start to finish (to my mind he represented him, not became him), and he delivers the story with enough zeal and specificity, but not fanw*nk, to appeal to anyone watching.

So, points go to him for all that. But what of the actual play? Any good I hear you ask? I for one enjoyed it very much. Gorman held my attention, there was humour as well as genuine biopic drama (especially with the intervention of the 2nd actor, who I thought bounced off of Gorman very well indeed throughout, and the first half where he only spoke with lines from Number Two characters was a nice touch), and it didn't drag on too long with peripheral parts of McGoohan's life included. Saying that, how he managed to keep going for such a length of time is testament to his will and stamina (reminds me of a certain Irish actor).

The first half flashed by (so much so that after the performance Gorman admitted to me that they had forgotten 10 minutes of it and that this was re-inserted into act two - if anyone in the audience noticed i'd be amazed, so more plus points for covering up their mistakes) and after a brief interval we heard the "Danger Man" theme and we were away with act two for more of the same. Gorman sprinkles his performance with some lovely little touches of McGoohan-esque body language, expressions, and vocal eccentricities which are familiar to us all ("this is a dreamy....PARTY" for example) but doesn't go the whole hog and try to do a Mike Yarwood on him, and this is where he succeeds where other amateur McGoohan performances always fail. Look out for the Orson Wells section - great stuff!

On the whole I thought it was a very interesting evening, I felt both entertained and informed, and I would recommend anyone to see this production if it comes your way. Perhaps the most telling factor is that my partner, who wouldn't know a McGoohan from a Macnee, also enjoyed it and felt she now knew the man.

Brian Gorman should be congratulated not only on his writing and performance, but also for simply trying something new and different in Prisoner/McGoohan fandom, and doing so in a bashful, approachable, and very respectful manner. I hope other public performances will follow and that they are well attended, as his hard work deserves it and he should be very proud of what he has created.