The Unmutual Reviews: "Everyman - The Story of Patrick McGoohan" (The Graphic Novel) 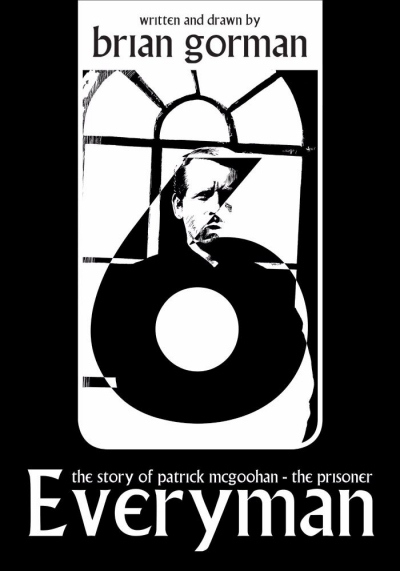 When actor and artist Brian Gorman told the story of the first 40 years of Patrick McGoohan’s life in his one-man stage production ‘Everyman’ (reviews HERE), it was both well presented and received. It was therefore with surprise and excitement that in 2014 he announced that he would be re-telling that story in ‘comic book’ form with the announcement of ‘Everyman’ being produced as a graphic novel , with Brian not only writing the ‘script’, but also drawing all of the content.

Whilst graphic novels and comic strips are not new territory for McGoohan’s characters, The great Jack Kirby had himself drawn pages of a ‘Prisoner’ novel, Lew Stringer has referenced the series many times in various publications, ‘Danger Man’ had several annuals and strips back produced in the 1960s, and fan offerings such as ‘Who is Number One?’ from 1989, released in the same year as DC Comics’ ‘Shattered Visage’, not much, if anything, has been attempted in terms of Patrick McGoohan himself as a man.

There have been books, articles, a play (see above) but never any other visual representation of the story of how a New York born boy who grew up on a farm in rural Ireland became to make the greatest TV series of all time. Taking on the task does not seem at the outset to be an easy one, but Brian Gorman will be known to many through his artwork (check out his excellent ‘Borderliners’ comics, with a new one due soon), so I was expecting it to be good.

Condensing a 40-year story which has so far filled two biographies, a 1-hour stage play, and countless pages of articles and essays, down into 70 pages of artwork could not have been an easy task, so I was concerned that much would be missed, yet when I had finished reading I did not feel that anything had been left out. Each chosen included moments of McGoohan’s life is cleverly selected and executed, and Brian has somehow managed to tell a 40 year story in 70 talent-laden pages in both an exciting and informative, and yet moving and reader-connecting, way, and is a unique addition to the pantheon of McGoohan-related publications.

Brian's artwork is superb from start to finish and to my mind is a project which has been created with care and attention to detail of the highest order. Whilst I am not an expert in such matters, it seems to me that it is easier to create your own new characters when drawing people for a graphic novel, than it is to draw existing, recognisable, famous faces, yet the latter is what Brian had to contend with. Using many contemporary and archive photographs (I have a particular fondness for the wedding photo, which Gorman has captured the warmth of quite brilliantly), Gorman has managed to do it very well indeed, to the point at which one would believe that some of them, actor Peter Wyngarde and architect Sir Clough Williams-Ellis among them, both of whom I had to do a double take for, were photoshopped stencilisations of actual images, not drawings (when they are indeed the latter, of course). On a lighter note, I personally also enjoyed playing ‘match the art to the original still image or TV scene’ whilst enjoying each individual page.

‘Everyman’ not only tells the story of one man’s life in an accurate and interesting way, but is presented with care and talent in equal measure. It did not only meet my expectations of being a well crafted, scripted, and executed piece of work, it surpassed them, and deserves a place on every 'Prisoner' fan's bookshelf'.