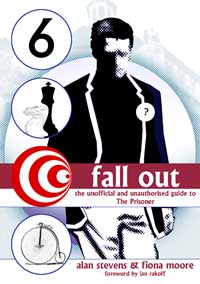 Telos Publishing are a well respected name in the area of Cult TV, with fine books about Blakes 7 and Doctor Who, among others, in their repertoire, so it was much interest that news was received in 2007 that a book on The Prisoner was being published.

With so many guides, handbooks, and companions already printed about the series, how would this one be any different and how would it compare?

It's worth noting tht it's impossible to compare this book with any of the others, and this is perhaps its greatest strength. Whilst Robert Fairclough's books are unrivalled for production minutae and facts about the making of the series, and Andrew Pixley's Network DVD companion book following in the same vein, "Fall Out" does not pretend to rival these books, and it is to the authors credit that they recognise that they wouldn't be able to do so and so have come at things from a different angle.

"Fall Out" is, instead, a book regarding the ethos and meanings hidden within the series. Of course, McGoohan's aim was to let the viewer decide for themselves what the series means, and again credit to Moore and Stevens who do not propose to give a definitive answer to the questions posed by the episodes, but instead throw up some ideas and let the reader decide what could and not could not be true.

Some of the ideas are the authors own, some are others' which the authors refer to, and some are well established facts from the cast/crew/creators of the series. It's not a mere listing, however, and there are essays throughout the book regarding certain aspects of the series which feature accross different episodes (such as Rover) and is written in an informative yet discussive manner, making it a nice read and not boring.

With each episode is also a few production or "making of" details, to set the scene as to what follows in each chapter, and by and large I think the authors have got that balance about right. What they don't do, and it must have been difficult to avoid this so extra kudos to them, is preach to the reader as to what is right or wrong, but merely suggest the reader thinks about what they suggest could be the underlying message portrayed.

It is therefore difficult to criticise the book, as it merely offers suggestions, but even so some of the suggestions are perhaps a little fanciful and unneccesary nevertheless.

One such example is where the authors muddle simple production techniques with hidden meanings, such as the use of the same actor in different roles (common in ITC series at the time, and casting director Rose Tobias Shaw confirmed that no 2 characters played by the same actor are the same character). However, the authors have been quick to say that they view the episodes as "text", and not therefore a production as such, so i'll let them off, but every text has a background in production which is as important as the text itself.

Because the book is of this nature, there are many examples of symbolism which probably do not exist, but that's the point of the book in some ways, showing that a meaning can be found in anything, and interpreted in several different ways. It does make you think and analyse what you are watching, and although the authors suggestions are in some cases far fetched, they do lead you to draw a conclusion.

As such, "Fall Out" is highly recommended to Prisoner fans as a companion to the more factual books.

In 2013 a Kindle version of the book was released, and can be purchased from the following link (as can the original book) with 5% of all sales going to charity at no cost to you or the publisher: