The Unmutual Reviews: "Fear in the Sunlight" by Nicola Upson 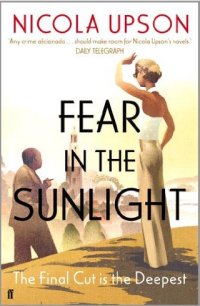 As the golden age of British detective fiction and the films of Alfred Hitchcock are long-held passions, it was with a frisson of anticipation that I picked up Nicola Upson’s novel Fear in the Sunlight, a murder mystery principally set in Portmeirion in the summer of 1936, and settled into my cosy chair.

The chief protagonist of Upson’s highly regarded series of crime novels was a real person, Josephine Tey, a mystery novelist of the era that also gave the world Agatha Christie, Margery Allingham and Dorothy L. Sayers. Here, in her fourth outing, Tey has travelled to Portmeirion to celebrate her 40th birthday with friends, but also to discuss with Alfred Hitchcock and his wife (and muse) Alma Reville the possible filming of her novel A Shilling for Candles. Killing two birds with one stone, one might say. This is a nice weaving of fact and fiction, as the real-life negotiations would result in Hitchcock going on to film the novel, as Young and Innocent, in 1937.

It is well known that Hitchcock was much given to practical jokes, and it soon becomes clear that it is his intention to have a little “fun” whilst in the village at the expense of his extended entourage (and a self-serving, unsympathetic bunch they are too). Reluctantly, Tey’s party gets dragged into the entertainment as well, and soon Hitchcock is pulling the strings like the consummate puppet master he was. However his desire to “explore the deepest hidden fears” of his captive audience does not develop as he would wish, for it is not only the atmosphere that could be cut by a knife – by the morning two women have been brutally murdered.

With such a cast playing upon such a stage, Fear in the Sunlight should be a first-class read. For me, the novel falls some way short of delivering upon its promise. There is too little tension and too many longeurs. There is no Hitchcockian climax, rather an inexorable and wordy grind towards our learning the identity of the culprit. However, the main problem is that the novel seems to suffer from an identity crisis, based upon its preoccupation with the darker aspects of sex. The four hundred plus pages are littered with references to (and one graphic realisation of) rape, pornography, sadism and sex-for-money. Added to this, we dip deeply into the well of loneliness of the imagined Tey’s own sexuality, which although handled with great sensitivity, does little to drive the story forward. It may be that Upson is attempting to strike a parallel with Hitchcock’s implied misogyny, fascination with sex and voyeuristic approach to film making, and undoubtedly she is addressing very real and adult subject matters that were as prevalent in the 1930s as they are now. All well and good, but these matters and the descriptions of the murders are depicted in a fashion that borders on the prurient, which does not sit comfortably in a work that in the main is written as if contemporaneous to the time of its setting.

Happily, Portmeirion is beautifully drawn, and it is apparent that Upson loves the village. She has certainly done her homework and her depictions of the village and hotel make the location the real star of the piece. James Wyllie appears throughout the story, an urbane and calm presence amongst all the thunder, and at one point, his parrot, Agatha, flies in on the action. Even Clough Williams Ellis (complete with breeches and yellow stockings) plays a non-speaking role, overseeing the construction of the Gate House in 1954, a cameo that Hitchcock would no doubt have approved of.

Other people will love this book. It certainly made for a reasonable entertainment, but I felt it suffered from the absence of a lightness of touch that would have benefitted it greatly, and I was sadly left with the feeling that Fear in the Sunlight was not so much an opportunity missed but an opportunity grabbed with both hands and throttled to death.

"Fear in the Sunlight" is available below from Amazon .