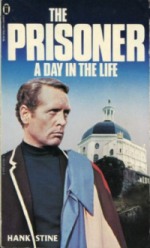 First published in 1970 by ACE Books and in 1979 in Great Britain by Dobson Books Ltd, and then in 1981 by New English Library. Re-printed in 1992 for the 25th anniversary of ‘the Prisoner’ by Boxtree Limited, and again in 2002 as part of ‘the Prisoner’ Omnibus Trilogy published by Carlton Books.

This is the most “easy to read” of the three novels, the one I enjoy reading, and like the most. At the outset the Prisoner has resigned, a photographed xxxxx-ed out, and a card falls into a file and the file closes – RESIGNED. What follows is a brief interpretation of what we see happen on the television screen of the opening sequence, save for one item – a folder falls flat on the floor by the unconscious body of the Prisoner. A name is printed on the file beneath white gingerbread houses and grey gabled roofs Penrhyndeudraeth: Portmeirion. So the scene is set, the Prisoner has resigned, is abducted, and the Village pictured in the mind of the reader by the simple use of the word Portmeirion, no further description is therefore required. Just as well as there isn’t any!

The title suggests a “day in the life” but actually it’s more like 6 days, during which the Prisoner known as Number 6 plays out his everyday life in the Village. He enjoys his favourite brand of cigar, suggesting contact with the outside world. There’s a female Number 7, well that’s only to be expected. McGoohan left 7 out of the television series, so it follows that an author will put a 7 in his novel. Number 7 asks the Prisoner what his name is, to which he replies “It’s the British equivalent of John Smith.”

Number 6 is put on trial, the charge, a lack of mutuality. In other words Number 6 is once again Unmutual! And if found guilty the penalty is death!

The author also relies upon the scenario of ‘Do Not Forsake Me Oh My Darling,’ in that Number 6 is released from the Village in the guise of the Colonel, with the idea of killing three men who collectively are Number 1. The code word Zed-m-73 is used, the name Sir Charles, and Janet, and what I like about this author is, that when Number 6 and Janet meet she uses his Christian name John. There is also the intimation that the Prisoner-No.6 is John Drake, by having the initials J D on the fob of the key to his car. That is extremely brave of the author, when the reader considers the fact that the majority of fans of ‘the Prisoner’ would have it not, that John Drake is the Prisoner!