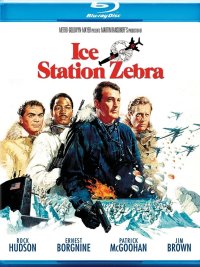 This Spring/Summer 2017 is the 50th anniversary of the filming of the great and underestimated Ice Station Zebra. To afficianados of PMG this is a must-have film. It may be hard to find on DVD but is an essential asset beside the Danger Man and Prisoner box sets. There is even a case to be made for Ice Station Zebra being Part 2 of a John Drake trilogy. He served with honours in the secret service in Part 1: Danger Man ... until being sent on special assignment to the North Pole in Part 2: Ice Station Zebra. There he more or less accomplishes his mission but mis-identifies the double agent and mistakenly kills the wrong man. In a rage at being sent on a virtually impossible, sabotaged mission he dramatically hands in his resignation at the start of Part 3: The Prisoner.

Ice Station Zebra as a movie in its own right has so much to recommmend it. It's a kind of Star Trek in a submarine, but there is no CGI or childish storytelling as in the Star Trek movies. The mood is concentrated and gripping, the look is realistic, the technology believable. The plot and setting hold parallels with the contemporaneous 2001 A Space Odyssey and Where Eagles Dare (also MGM blockbusters), and the later The Thing. The characterization is rivetting. Rock Hudson has a Captain Kirk style role, and an appropriate air of authority and competence ... until his increasingly disconcerting encounters with 'the passenger', David Jones. A nondescript name like this could be a bland made-up name as adopted by No. 6 at times (was it Peter Brown?)

At any rate, McGoohan is in blistering form and all but wipes the floor with Rock Hudson both as actor and character. Not to be missed. Seek it out!

"Ice Station Zebra" is available below from Amazon .