The Unmutual Reviews: James Bond 007: The Man With the Golden Gun 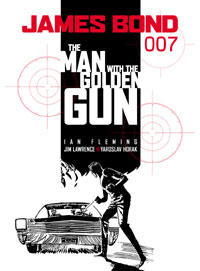 Although you wouldn't know it from looking at the newspapers of today, there was once a golden era of adventure comic strips gracing the pages of the nation's tabloids and broadsheets. These daily fragments of long action-thrillers involved a high degree of skill in their execution. Each episode was usually no longer than three panels, yet had to convey a sense of location, character, and plot within that limitation.

Titan Books are now publishing some of the most highly regarded strips of that era as a series of trade paperbacks. Over the next several months, collections of both James Bond (from the Daily Express) and Modesty Blaise (from the London Evening Standard) will be appearing. Titan originally published the books in 1987, but now they've been redesigned with new covers, new introductions and extra features.

The first book, JAMES BOND 007: THE MAN WITH THE GOLDEN GUN is published on February 27th. Adapted from Ian Fleming's novel by Jim Lawrence and the artist Yaroslav Horak, "Golden Gun" is retold in 209 daily strips, four to a page. Although the James Bond newspaper strip had begun in 1958, Titan have chosen this serial from 1966 to begin their series because it's the period when Horak took over the artwork. As Bond aficionados will know, "The Man With the Golden Gun" starts with Bond missing in action and presumed dead (but in fact brainwashed by his enemies) returning to London and attempting to assassinate M. Thwarted and de-programmed, he's then sent on a "suicide mission" to track down the sadistic killer Scaramanga.

It's an impressive adaptation, and certainly more respectful to the original novel than the movie starring Roger Moore which was made years later. Horak's artwork is stylish, fluid, and gritty. The women are sexy, the villains are brutal, and the locations are finely detailed. In short, Horak was the virtuoso artist for Bond, and the perfect compliment to the tight pacing of Lawrence's scripts.

The second story in the book adapts "The Living Daylights". Although the original story was published before "Golden Gun", the strip version did appear chronologically after, hence its inclusion here. A shorter story at 56 strips, but nevertheless a solid and fairly faithful adaptation.

The book also includes an introduction by the author's niece, Lucy Fleming, short features on Ian Fleming and the strip's creators, cover reproductions of the original novels, and a complete checklist of every Bond newspaper strip, including the dates they first appeared.

OCTOPUSSY is to be the next title in the series, coming in May. It's to be hoped that the books reach the audience they're intended for. Die-hard comics fans are notoriously blinkered in disliking comics outside of costumed superheroes, so these graphic albums need the support of a wider market and to grab the attention of the general public. Being the closest visual adaptations of Fleming's work, they deserve success. Hopefully, if they are well received then we can look forward to a long line of books featuring these classic examples of British comics at their finest.