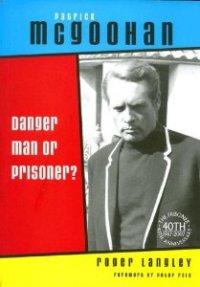 I just found this a really extraordinarily badly written book. Here's a typical sentence, where caution, syntax, grammar and common sense are all thrown to the same wind: "Whether the star's possible mid-life crisis, a realisation that there was a crossroads in his career mid-decade or whether the actor harboured a wish to be experimental - like his mentor, Orson Welles - might never be known". And this in a book, touted by the publisher as explaining "the enigma" that is Patrick McGoohan. Well, the author doesn't know, so how can the readership?

The other thing that the above dog's dinner of a typical sentence demonstrates is that the author hasn't even begun to get under the skin of his subject, otherwise he wouldn't write such compromising cobblers. The surface of the subject is hardly scratched. This isn't a biography of Patrick McGoohan so much as a depthless look at those aspects of his life that are already in the public domain, much of it on the 'Net. What is pointedly missing is commentary from the subject on those "black holes" in his life, where speculation fails to replace substance.

Worrisome also is the author's uneasy relationship with his subject. The whole handful of their abrupt personal telephone conversations and snippets are recorded verbatim but, if they are meant to be passed off as interviews, well, the author's interviewing technique needs some upping. These pointedly brief exchanges only serve to highlight the paucity of original thought and the fact that the author has rarely spoken to his subject, never actually met him and certainly never formally interviewed him - and, hey, doesn't it show?

And the one occasion when the author, who insists on referring to himself as "this writer" (as though anyone else is writing this sorry stuff), actually finds himself in the same tv studio space as his subject, his write up contains mistakes and he leaves us without any background to this momentous occasion, nor any mention of his subject's remarkable behaviour towards his chauffeur and his fellow guests in the Green Room.

In the same way that many years ago the author levered a number of other people's McGoohan interviews into a "constructed text", this is a constructed book (the author admits as much in Appendix 7 - yes, 7 appendices, it's that kind of teeth-pulling unfinished exercise), little more than a glorified scrapbook, a linked series of cuttings, other people's reviews, elderly Sheffield residents' memories, actors who struggle to remember what was only a job 40 years ago. Sir Donald Sinden is on record as critical of 'The Prisoner', but curiously that doesn't feature amongst the author's pre-owned musings, despite his claim of thoroughness.

In his writing up of some minutiae the author also falls for a number of media in-jokes, embarrassingly reproducing them as facts, and there are some conspicuous-by-their-absence attributions too, which let the book down badly in terms of authority. Even worse, there's a lot of text about what is, or more often is NOT, being written about, some of it self-contradicting, where the author declares he is not concerning himself with the actor's private and family life, when this is patently nonsense in too many too personal references.

Even regardless of the factual pitfalls, the misidentification of the subject's childhood home being one of the most prominent, the prose style is so tedious and every page cries out for a sub-editor. At no time do you ever feel you've got to know what makes McGoohan tick.

There are real literary irritations too, where the author goes for alliteration and fails, for example: "brainwashing and beliefs; censorship and coercion; jingoism and justice; psychology and peace; loyalty and love". A poor mix of hard, soft and silent consonants doesn't create alliteration and the whole effect is cringe-making. Where is the editor?

At the end of the day the world is still without a probing, insightful, in-depth book on Patrick McGoohan, but that, as all true McGoohan supporters know, is exactly how the subject would want it. And who hasn't seen the Easter Egg and heard the subject's one word comment on the topic?!

A really badly written book in more ways than one, not remotely "definitive", as its publisher claims, and a big opportunity missed.