From September 13 through 15, 2007, the Mid-Atlantic Nostalgia Convention was held at the Clarion Hotel in Aberdeen, Maryland, USA. PRISONER actress Annette Andre was one of the featured guests, along with her husband, television writer/producer Arthur Weingarten. 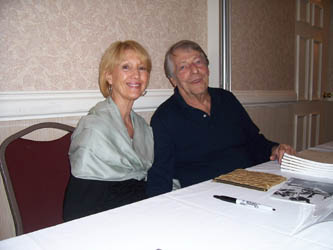 The weekend featured a dealer's room with several vendors selling videos, DVDs, books and other memorabilia relating to all aspects of film and television from the silent era to the present. There were also interview panels featuring each guest.

Annette was interviewed on Friday morning 14 September. She happily discussed various aspects of her career, from her roles on THE SAINT and RANDALL & HOPKIRK (DECEASED) to working with Buster Keaton in A FUNNY THING HAPPENED ON THE WAY TO THE FORUM, to her appearance in the "swinging sixties" book BIRDS OF BRITAIN. 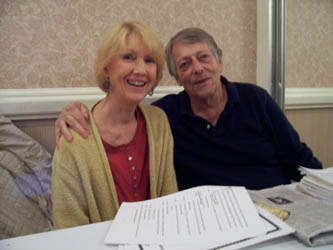 In addition to the dealer room and interviews, the convention also featured a 24-hour screening room running rare films, TV shows, and classic commercials much to the delight of the film and TV addicts who attended.

There was even a "3-D" viewing of the 1950s monster movie classic THE CREATURE FROM THE BLACK LAGOON.

Several golden-age British television programs were well represented with episode screenings of THE NEW AVENGERS, THE SAINT and RANDALL & HOPKIRK (all of which featured appearances by Annette Andre). This gave stateside TV fans a chance to sample some UK shows that rarely get screened in the US. And yes, Annette's PRISONER episode "It's Your Funeral" was shown, being one of the first screenings of the convention on Thursday morning.

The weekend turned out to be a fine event, especially for any American PRISONER fans who were most grateful to have met someone who worked on the series.

Information on any previous or upcoming conventions can be found at www.midatlanticnostalgiaconvention.com


Click here to return to the Unmutual Review Page