The Unmutual Reviews: The May 2007 Prisoner weekend

With the venue opening specially for the event at 10am, old and new friendships had already been made before Leslie Glen kicked off the Prisoner Mind Mash Seminar at 11am with a quick run through of the programme. 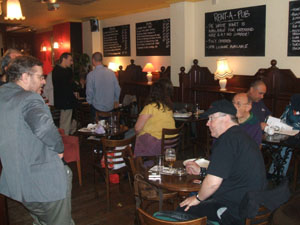 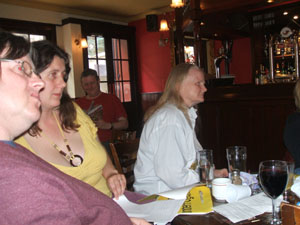 It was straight into the first discussion, "Dodge your Dystopia", presented by Peter Dunn. Following a brief summary of what it actually meant Peter was soon writing down the good and bad points of "The Village" as the lively audience called them out and debated whether each point actually was a "plus" or a "negative". Once the list was exhausted Peter then proceeded to work through the top countries of the world for each point, with each country getting a tick for matching a "Village plus" and a cross for matching a "Village negative". 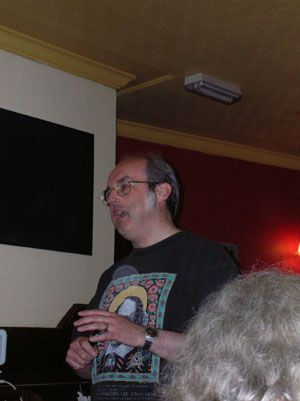 The second discussion was a question and answer session by Dave Lally about the London walkabouts, its history and stories from 20 years of walkabouts. 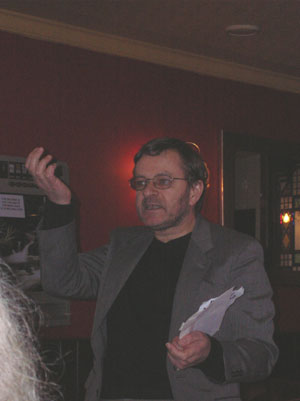 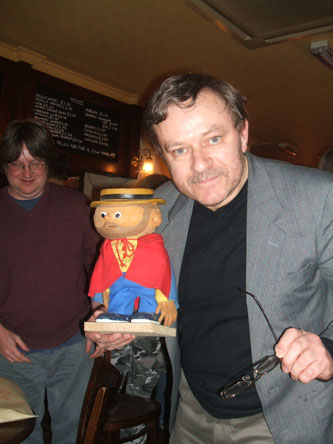 An audio/video presentation followed with images of Portmeirion by Jan Davis accompanied by music by Leslie Glen. It was then time for lunch, with the pub serving a variety of hot meals for the attendees. 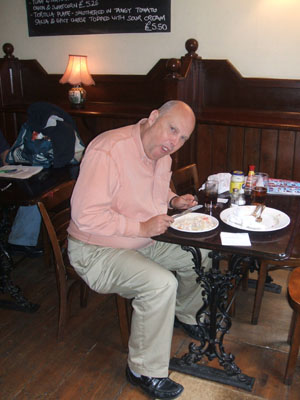 Next up was the Prisoner Interrogation quiz from Leslie, in which Rick Davy won scoring maximum marks, winning a prize in the process (as did 2nd placed David Mackenzie, and last-placed Tony Woodrow). 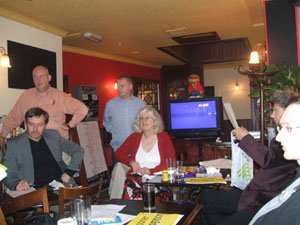 Tony then took to the floor himself for his presentation which looked at what "The Prisoner" had to say about television in general. 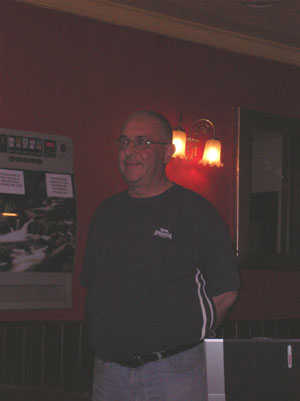 Singer, musician, and author Simon Wells then took to the floor to provide a live acoustic concert of songs. 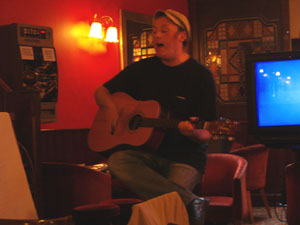 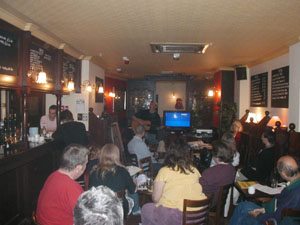 Click on the streaming buttons below to watch his interpretations of "All you need is love" and "That's entertainment".

Rick Davy and Dave Lally then provided a question and answer session regarding all things "Prisoner", before the prize raffle draw with almost countless prizes available. 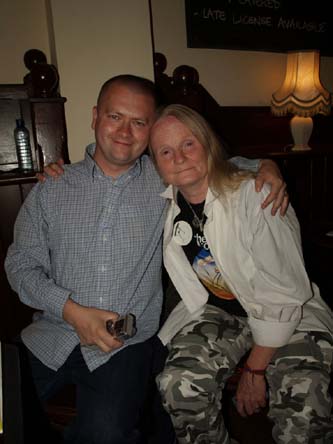 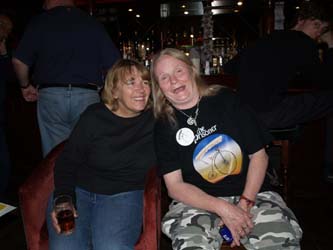 After a few words from Leslie, the enjoyable and well-attended event drew to a close, with the announcement that over £100 had been raised which will be donated to Ty Gobaith Children's Hospice as part of the PM2007 fund. Thanks to Leslie and all the contributors, plus Andy and the staff of The White Hart. A well earned pint or five was then consumed at a local hostelry. 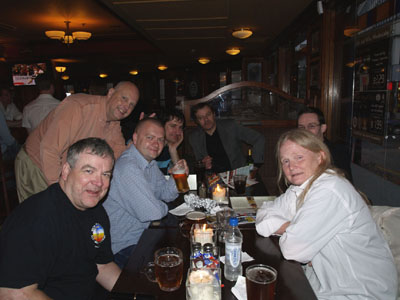 Dave Lally's Prisoner location walking tours have been a feature of Prisoner fandom for many years, but it was still a delight to see so many new faces from all over the UK (plus a visitor from the USA) attending the event for the first time, along with some of the regulars. 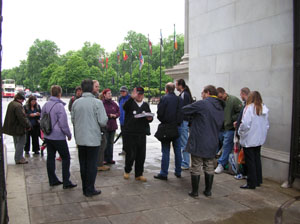 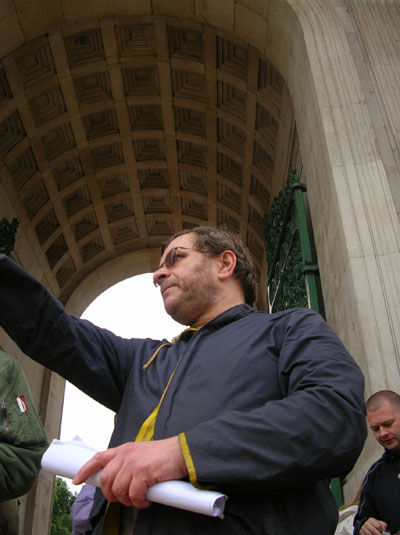 The tour began with visits to locations from Many Happy Returns and the opening sequence (including the famous resignation corridor and underground car park).

Although the weather was not kind, everyone remained in good spirits as more locations from the series from those episodes plus "Fall Out" locations such as Parliament: 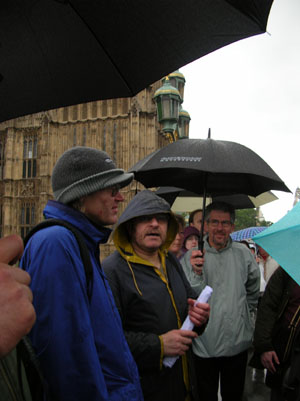 ..........and "Do Not Forsake Me" were visited before the tour's conclusion at Number Six's London home in Buckingham Place before the traditional visit to Victoria's pizza hut. 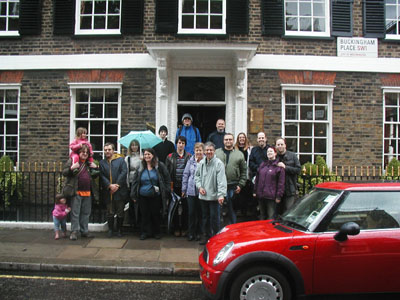 The final event of the weekend was a very special one indeed. Accompanied by members of the Elstree Film Society, Dave Lally took the attendees on a tour of "Prisoner" and film/tv locations in the Elstree/Borehamwood area. First up was the BBC studios; 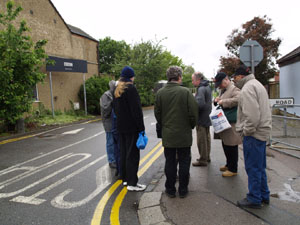 Then the shops which featured in "The Girl Who Was Death". 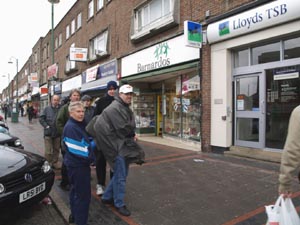 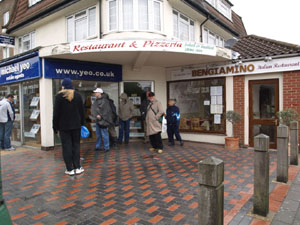 Other locations included the Elstree Holiday Inn (which stands on the location of the Thatched Barn, seen in "Girl"..... 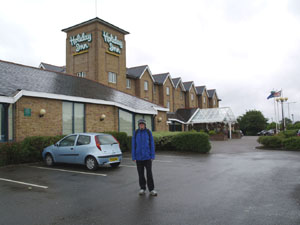 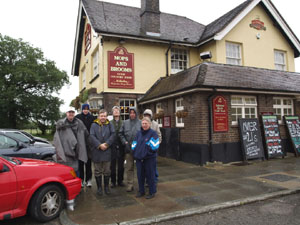 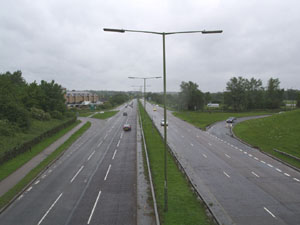 .....and the hanging tree from "Harmony. 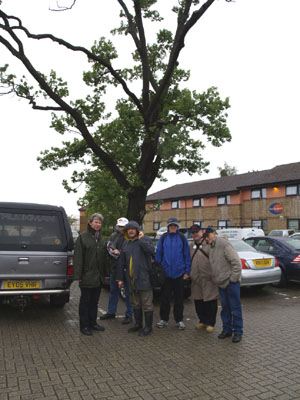 Then followed some other streets seen in "Girl", and the sites of ABPC studios and the MGM backlot, then a visit to the home of someone who worked on The Prisoner series back in the 60s, a look at some unseen documents from the series, and a tour of the exterior of Elstree studios (which of course includes the Big Brother house!).