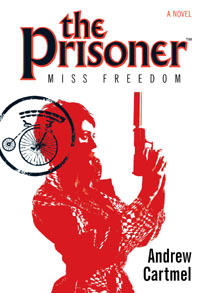 It was a long time coming, but finally the second in Powys Media's planned set of six"Prisoner" novels arrived in the Spring of 2008 (with a special edition produced in July for PM2008) and, like the first novel "The Prisoner's Dilemma" it does not disappoint!

Set during the "Prisoner" series (IE not a follow-up to "Fall Out"), Andrew Cartmel (he of "Doctor Who" script-editing fame) has produced a daring approach to a work of "Prisoner" fiction in that, frankly, hardly any of it is set in what we would recognise as The Village.

Without giving much of the plot away, the story relies heavily on flashbacks and dream sequences (a la "A, B, and C") as Number Two, Number 666, and the mysterious Wing Commander try to find out information from Number Six, and al three of these characters are believable and pictorially written, without an abundance of prose, whilst at the same time a rescue mission is underway.

The book has an odd start, in that the reader isn't sure quite where it's going, but all becomes clear later in the volume when the history and motivations of the characters are slowly unmasked (with a surprise and big ending to finish, which I won't spoil here). The Village Tango competition whilst ridiculous is frankly exactly the sort of thing one would expect, and the recurring Village sales lady an excellent character which would have fitted well into any "Prisoner" script.

As is always the case, Number Six just doesn't "sound" like McGoohan's character when he speaks, but other than lifting text from the series itself it would be an impossible task to replicate him.

Another criticism is the references to Number Six having sexual desires, or feelings. Whilst plausible the character would feel such things, I think every "Prisoner" author should respect that the series was and always would have been written, due to McGoohan's wishes, totally void of such references. I don't believe it is too much to ask that the ethos of the original series should be kept in any follow up story, and some of the included themes are simply inappropriate in a "Prisoner" book.

A panicky and unsure Number Two and a tantalising female lead are the bread-and-butter of "The Prisoner" and Cartmel has written these characters very well, particularly the latter as something straight out of "Danger Man", in fact at times I felt like I was reading more of a "Danger Man" than a "Prisoner" book, and that's no bad thing. I would have liked to have seen a less-predictablly vile villain than the Wing Commander, and perhaps a little more subtlety may have been required, but i'm nitpicking as the character does it's job and gives us another reason to keep reading and not put the book down.

At 156 pages with a cover (excellently designed by Robert Fairclough) price of £10.99 the book is quite expensive (especially for a paperback), and in setting the story away from the typical Village backdrop one could argue that the author has been a little lazy, merely writing a good secret agent romp and planting it into the "Prisoner" scene.

However, that is by far the books biggest selling point. With his use of flashbacks, dream sequences, and the setting of a laboratory taking up a good 75% of the book, Cartmel has done the wisest possible thing an author of "Prisoner" fiction could do. It is always easiest to compare "Prisoner" fiction to the existing episodes, and therefore the fiction will always come up second best. But with Cartmel concentrating more on an exciting narrative, and perhaps recognising that he could not compete with the original series, a new type of "Prisoner" novel has been created, and one which I hope future authors in this and other series will follow. However, it's so far removed from "The Prisoner" that one wonders where the series is ultimately leading.

A few character name changes and this wouldn't be a "Prisoner" novel, but what it would be, and what it is, is a cracking good spy story and is highly recommended.