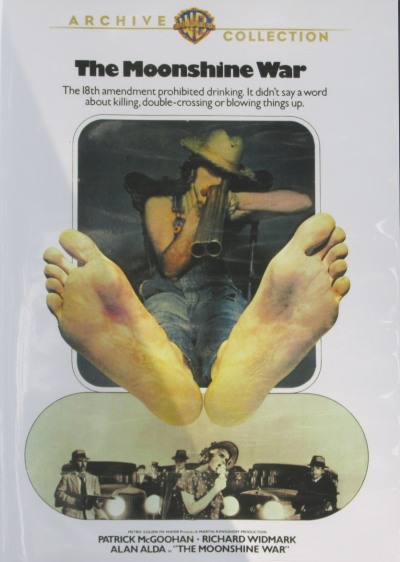 After reaching a career pinnacle in the 1960s with Danger Man and The Prisoner, Patrick McGoohan relocated to the US in the early 1970s. No longer having to worry about fame or money, he spent the second half of his career picking and choosing whatever roles caught his interest. As a result, he appeared in many high-profile productions including Columbo, Escape From Alcatraz and Braveheart. At the other extreme, his career was also dotted with obscure oddities such as the short-lived medical series Rafferty, the bleak hostage drama Kings And Desperate Men, and the bizarre psychological horror film Hysteria.

Yet it was 1970’s The Moonshine War that proved to be one of the quirkiest films of McGoohan’s career. Fans of his work will find it of interest, since it was the first production he appeared in after the end of The Prisoner. McGoohan was last seen in 1968, speeding toward the camera in his sleek Lotus 7 during the final seconds of "Fall Out," yet only two years later, the opening shot of the Moonshine War told audiences that this new story was going to be something completely different. McGoohan is again driving a car toward the camera, but this time, he's in an old jalopy coasting to a stop to read a roadmap, while a country/western song plays over the scene. If McGoohan wanted to leave his 1960s television fame far behind to begin a new phase of his career, then he got his wish. He also got top-billing -- one of the few times in his career that he headlined a film; although, this might have been because he got on well with the producer, Martin Ransohoff. This was the second of three productions the two made together, along with Ice Station Zebra in 1968 and Silver Streak in 1976.

In this odd action/comedy/drama, McGoohan plays sleazy revenue agent Frank Long in 1930s Kentucky, just before the repeal of Prohibition. Knowing the potential value of alcohol once it's again made legal, Frank attempts to seize several thousand gallons of moonshine from his old army buddy, John "Son" Martin. When Son refuses to give up the stash and his buddies threaten Frank, the latter calls in criminal bootlegger Dr. Emmett Taulbee to put pressure on Son. Frank's plan eventually spins out of control through a series of double-crossings and killings hatched by Taulbee. The helplessness felt by McGoohan's character keeps the viewer wondering what direction the story will take. Eventually, it all comes together in a stand-off at Son's house with the whole town watching. Guns are drawn and sides are taken, as old alliances are shattered and new ones are formed. It ultimately leads to a surprise ending you'll never forget.

While he seems to struggle a bit with his Southern accent, McGoohan's character develops well throughout the story, telegraphing greed in the beginning, frustration in the middle and regret by the end. Son Martin is ably played by Alan Alda (two years before the premiere of M*A*S*H), while 1950s film star Richard Widmark (The Alamo, How The West Was Won) does well as Doc Taulbee, a discredited dentist-turned bootlegger. Melodie Johnson and Suzanne Zenor adequately fill the roles of romantic interests for Alda and Widmark, while in a surprising bit of casting, Taulbee's psychotic sidekick, Dual Metters, is played by iconic pop music producer Lee Hazelwood. He began his career in the 1950s with instrumentalist Duane Eddy, where the two of them created the "twangy" guitar sound of Eddy's hit songs. By the mid-sixties, Hazelwood was writing and producing for Nancy Sinatra. Their biggest hit was the immortal 1966 single "These Boots Are Made For Walkin'." Other faces to look for throughout the cast include Tom Skerritt (Picket Fences), John Shuck (Star Trek films "IV" and "VI") and Teri Garr (Close Encounters, Tootsie). In one of the film's memorable scenes, Garr (credited as "Terry") plays a young wife who, along with her husband, is forced at gunpoint to disrobe in the middle of a restaurant.

The score by Fred Karger is minimal, but effective, and three pop songs help flesh out the soundtrack. "Ballad Of The Moonshine" by Hank Williams Jr. neatly establishes the premise as it's played during the opening titles, while The Five Man Electrical Band (known for its 1971 hit "Signs") contributes the catchy rock number "Moonshine (Tennessee Wine)." Finally, Roy Orbison's operatic pop song "It Takes All Kinds Of People" is put to good use over the closing credits.

Production on the film took place in the fall of 1969 in and around Stockton, California. The screenplay by Elmore Leonard was based on his novel of the same name. Leonard was a hot property during this time -- his novel, The Big Bounce, was filmed the same year with Ryan O'Neal and Leigh Taylor-Young; while in 1974, Mr. Majestyk with Charles Bronson was a big hit. Two decades later, Leonard's career hit another peak with three popular films based on his novels: Get Shorty (1995), Quentin Tarantino's Jackie Brown (1997) and Out Of Sight (1998). However, Leonard was unhappy with the film version of the Moonshine War. In 1997, he told writer Tom Nolan that the producer fired him from the film, only to have the director rehire him a week later -- all while the script was being changed without his input! Leonard also recalled McGoohan walking up to him after filming a scene and remarking, "Well, what’s it like to stand there and hear your lines all fucked up?"

The film premiered in Hollywood on June 24, 1970 to mixed reviews. Variety slammed it, calling it "a lower-case mediocrity . . . badly adapted" by Leonard from his book, and "at 99 minutes, a dreary potboiler." They called McGoohan "unbelievable with a Dixie accent," but gave credit to Richard Kline's photography, calling it "a small consolation." TV Guide was harsh as well, remarking that the "top cast gets hurt by a pathetic story they cannot save." On the other hand, Time Out in the UK liked the film, calling it "an amiable caper . . . with one eye very much on Bonnie and Clyde," in which "the characterizations - abetted by nice dialogue - make it more enjoyable than not."

Reevaluating the film over forty years later, it is indeed a mixed bag. Its schizoid style could be attributed to the fact that director Richard Quine was known more for light comedies such as Bell Book and Candle, and Paris When It Sizzles. Perhaps he found Leonard's novel too harsh, and tried to take some of the violent edge off by playing up the comedic elements. For a big-budget studio production, it feels like an exploitation flick that could have easily played on the drive-in circuit. Quirky characters, occasional violence and the wavering between comedy and drama all add to the "B-movie" feel. Yet it's also great fun. Several plot twists keep the story moving, while just enough subtle humor lightens the mood (every major cast member gets a memorable one-liner or two). On the downside, Stockton, California was hardly the best stand-in for rural Kentucky, while many of the actors go overboard with exaggerated Southern accents. Somehow though, the whole thing works.

In August 2014, The Moonshine War finally made its debut on DVD through Warner Brothers' fantastic "Archive Collection." Sadly though, they didn't do justice to the film. Apparently, the studio grabbed whatever print they could find, and slapped it onto a disc without any significant remastering. While the picture quality is acceptable, many sections of the print suffer from faded colors or are marred with dirt and specks. The exterior day scenes look fine, but most of the nighttime footage suffers from crushed blacks and heavy grain. Poor image quality such as this stands out even more in the DVD/Blu-ray era, where even casual viewers are now accustomed to seeing older productions look pristine as if they were filmed yesterday. It's especially unfair to this film, since it hasn't had a legitimate release in decades. It would have looked great with even the most basic remastering -- it's not like Warner is lacking for money. Also disappointing is the exclusion of the "Making-of" documentary, Shooting The Moonshine War. If Warner couldn't bother to remaster the film, at least they could have tacked on the documentary as an extra (thankfully, it's been available on YouTube for years now).

Interestingly, this film has the distinction of never having been released on videotape, although thankfully it was not completely unavailable throughout the years. During the 1990s it was broadcast several times in the US on the Turner superstation TBS, where I managed to record it off-air in 1992. Out of curiosity, I compared my old VHS copy to the new DVD. Surprisingly, the TV version did not suffer extensively from the "pan & scan" process. While a small amount of image is missing from either side of the screen, there is actually more picture to be seen on the top and bottom. Apparently, the film was shot in full-frame 35mm, then "matted" with black bars on the top and bottom for theatrical screenings (this matting was then removed for TV presentations). Both copies of the film appear to be complete, but the televised version runs about five minutes shorter than the DVD, due to the network slightly speeding up the film to shorten the running time, and in cutting the occasional line of dialogue that contained obscene language.

Strangely, there is a difference in the music credits. The TBS version contains what appears to be the correct title card crediting Fred Karger as composer, and listing the songs by Hank Williams Jr., Roy Orbison and The Five Man Electrical Band. However the DVD print contains a different title that credits Neil Hefti (famous for the Batman TV theme) for composing the score, along with a song called "Love Begins Love." The latter doesn't appear to be anywhere in the film.

So if you're looking for an arthouse classic with subtle drama and award-winning performances, go elsewhere. On the other hand, if you're looking to unearth a quirky obscurity with memorable characters and a fun story to fill up an hour-and-a-half, then The Moonshine War will do just fine.

Some images from the film appear at: http://www.flickriver.com/photos/tags/widmark/interesting/