The Unmutual Reviews: "On Show: Portmeirion".
Review by Gareth Hughes 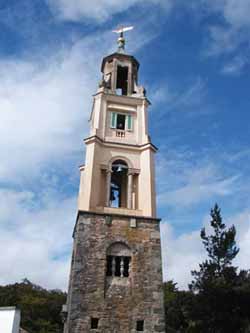 Many films and TV series have used Portmeirion as a set over the years, while the eccentric story and visual appeal of such an unusual place also makes it a natural subject for documentary treatment – from brief but regular snippets on travel programmes, through its appearance with a mercifully fully-clad Billy Connolly, to full-blown documentaries about the village and its architect.

This last category (which includes several excellent films from the 1960s and 70s) has now been augmented by Chwarel’s production for BBC 2 Wales. Sioned Morys, daughter-in-law of Clough’s friend, the writer Jan Morris, has raided the film and audio archives to tell the story of Portmeirion largely in Clough Williams-Ellis’ own words, with images taken from around a dozen previous films of the place, including a 1939 Pathe newsreel feature which may be the earliest surviving moving images of the village; another Pathe film from the early 1960s; and footage from the 1969 BBC documentary “A Love Affair With Life” which remains - perhaps - the best of the documentary crop.

There are also a few archive photographs and drawings from the RIBA collection, including some – one apparently an early design for Angel - which have not been seen before.

To this source material have been added some sumptuous aerial filming which is among the best ever shot – bright, clear and varied, and interviews with both of Clough’s surviving children, Susan and Charlotte; former head of the Cardiff School of Architecture Malcolm Parry; and Jools Holland, who gives a short tour of his Portmeirion-inspired studio complex in Greenwich.

Clough’s commentary has been cleverly edited together from various sources – not just television and newsreel appearances but also the 1970s audio-visual presentation “Portmeirion, the place and its meaning” which is shown in the “Playhouse” in the village (regrettably no longer in its original arrangement). While this is fascinating, one result of which is (and this is really my only criticism) a lack of narrative direction in the film as a whole, which plays slightly more as a series of episodes than telling the story of the village from its beginnings.

This is a fitting conclusion to a year of 80th birthday celebrations which has seen the reprint of the classic “Portmeirion, The Place and its Meaning”, and the more recent appearance of the luxurious Antique Collectors’ Club coffee-table tome - oh, and Laurence Llewelyn-Bowen in the village for the Holiday programme. There’s a lot more still in the vaults though – Hugh Casson’s half-hour BBC documentary from 1981, or a 45-minute BBC programme in the “Bird’s Eye View” series from 1969 narrated by Clough and unseen since its first broadcast among much else. Perhaps it is time Portmeirion got together with the various film archives and released a single, definitive DVD of “village” documentaries?