2007, 25 minutes, available at Portmeirion or from Portmeirion’s eBay shop, £10 post free in the UK 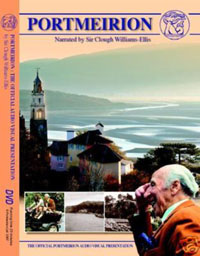 In 1973, to mark his 90th birthday, Clough Williams-Ellis recorded a spoken commentary to accompany a standardised slide presentation on Portmeirion, which was photographed by Bruno de Hamel. This was made available, at least in the mid1980s, in the Playhouse next to the Triumphal Arch in the village. By that date, the presentation, which must have been ahead of its time when first produced, was showing signs of age – the slides scratched and fading and sometimes out of sequence of lagging behind the stretched and distorted commentary and music. It was, however, still an authentically Cloughish product.

That changed, however, around 1990 when the presentation was revamped. The commentary was re-edited, the music of Mozart and Handel replaced by more “naturalistic” and abstract material, and the slides were also largely replaced with rather too few shots of the village, and too many of broad skies and the waters of the estuary. This version of the show continued to be shown every half-hour throughout the Portmeiron visitor day, but to this reviewer at least, although Clough’s commentary mostly survived (albeit chopped up into a different order to the original and with sections missing) the overall effect seemed dumbed-down, pastel-coloured and touchy-feely in comparison to the confident, all-or-nothing vibrancy of the original. This watered-down version was also sold as a video recording in Portmeirion’s shops.

The presentation has now been rearranged yet again, and made available on DVD. Lantern slides are now a thing of the past and so this is a proper film, made by Chwarel productions who were responsible for the excellent BBC2 Wales documentary on Portmeirion broadcast in 2006. Much of the bright and spectacular aerial footage from that programme has been reused here, with the addition of other material including some with an uncredited actor putting in a passable (silent) performance as Clough, stalking round the village in those familiar yellow socks (though, for some reason, not the equally-familiar yellow waistcoat). The commentary is almost, but (I think) not quite that of the original 1973 presentation, the music newly-commissioned and, though sometimes intrusive, a significant improvement on the seagull-cries and rippling water of the 1990s version and might be called folk-baroque, much like Portmeirion’s architecture, in fact.

The moving footage is augmented by a selection, slightly too rapidly glimpsed, of historic still photographs (some not seen before) and a few of Clough’s designs for the village (including a frankly bizarre late 1920s drawing to “Palladianise” the Hotel with the addition of another floor and a huge but rather scrawny classical portico and pediment facing the sea, like the Gloriette on steroids).

This is a great improvement on the version of the audio-visual presentation previously available for home consumption and at £10 isn’t bad value at all for such a specialised production. Just a pity nobody checked the spelling on the Castell Deudraeth menu blackboard before the cameras rolled, though.