The Unmutual Reviews: Portmeirion on Film and Television, by Roger Langley. 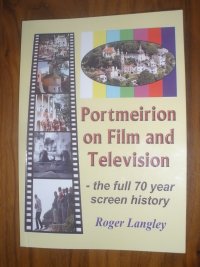 132 pages, over 200 (grainy) photos for which copyright permission has not been obtained (unclear as to whether or not legal action will be taken against him as happened with his "Danger man or Prisoner?" book). No ISBN as self-published.

I recently again visited Portmeirion and it was as fabulous as ever. However, the Roger Langley 6o1 self-publicity machine has churned out another almost but not quite useful potboiler, "Portmeirion on TV and Film", which infests all the shops and provides and exhaustive - and exhausting - account of Portmeirion's screen appearances. Well - since about 1982 anyway. It misses several earlier appearances (I won't name them here as I fear an unattributed revised edition, though I would mention that Johnny Ball's "Think Again" was not a quiz show), but then goes into the most pointless detail. Fans of Langley's distinctive prose style will be relieved to hear that the tortured syntax, desperate striving for the appropriate phrase, and general impression of being translated from Serbo-Croat by a native Swahili speaker is preserved intact. Printed on bog roll quality paper, this little tome can be yours for a mere £4.99. Save the money and invest in the Portmeirion guidebook instead, which has been revised with a few of my archive photos in it. (Not credited but I can forgive them).