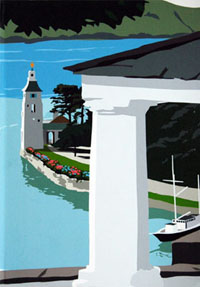 Portmeirion seems to lend itself, oddly, more readily to written than to visual artistic interpretation. Famously, Clough Williams-Ellis built Chantry as a studio for Augustus John, which was never used, and Clough recorded in Portmeirion, The Place and its Meaning that painters tended to feel he had manipulated the place too much for them to make their own interpretations. Meryl Watts, who lived near the village and produced a host of linocut postcards in the 1950s and 60s, was one of the more prolific of the few exceptions to this rule – though her black and white style lends an oddly sombre air to the village.

Millions of words, on the other hand, have been written about Portmeirion. At the last count there were more than fifty different version of official and semi-official guidebooks, from nineteen editions of Portmeirion Explained between 1931 and 1969, to specifically “Prisoner” related guides and lavish coffee-table tomes in recent years. And then there are the countless magazine and newspaper articles.

Now words and fine-art pictures have been artistically combined.

The Whittington Press is a specialist publisher which takes great pride in the craft of traditional printing. Its productions are redolent of the truly hand-made, of a joy and pleasure in creating a work of art, that Clough would have found familiar.

Leslie Gerry is an artist who has looked again at the stylistic tricks, the simple forms and bold flat colours, that are familiar from railway posters and book jackets of the twenties and thirties, and who reinterprets that nostalgic look through the modern medium of the computer and the giclee (art-speak for inkjet) printer.

The seven illustrations in Portmeirion are views that will be familiar to lovers of the village – looking under Bridge House into Battery Square, the view of the Hotel from the Watch House, the village from the quayside, looking up to Battery Square between the Round House and Lady’s Lodge, a general view across to the Dome and Campanile, the Gloriette and Telford’s Tower, and the Town Hall and Angel - but presented in a startling fashion.

Leslie Gerry’s treatment of these views lends them a powerful inter-war ‘period’ quality – one could believe that these are what the village’s poster advertisements would have looked like, had the village not been the creation of a man fundamentally opposed to the rash of poster advertisements - and vivid colours, tones and textures, thickly-inked on thick hand-made paper and bound together with a short text by Robin Llywelyn to set the scene for each image and printed in traditional letterpress. Bound in concertina fashion so that each double-spread opens fully, and presented in a decorated slip case, the technical care that has been exercised in producing this book is obvious in every aspect.

Dedicated collectors will note that the book comes in three editions – 225 copies of the standard version, a miniature edition (though collecting miniature books is a recognised niche area, it is one that is a bit too gimmicky for this reviewer, and seems more calculated to appeal to people who lavish care on dolls’ houses long after they should have grown up) of 200 copies, and an especially lavish, stunning, 125-copy special edition, presented in a large, decorated, archive box which also contains a further, signed, set of the prints with one additional image (the view from the Centenary Gazebo) which does not appear in the bound volumes, and a poster-sized version of the view from the Watch House.

Some of the images are, thankfully, available from Portmeirion in (much) more affordable form as greetings cards, but these inevitably give only a hint of the delight offered by the full-sized artworks.

At £45 for the miniature, and £195 and £345 for the standard and special editions, this is clearly not a book for those for whom value is a crude equation of price and quantity. It will, however, by highly prized by anyone who recognises that quality is the better yardstick. The Whittington Press’ Portmeirion is a beautiful object, a delight to handle and a joy to see.