The Unmutual Reviews: "Portmeirion Pre War" by Roger Langley
No ISBN (self published). 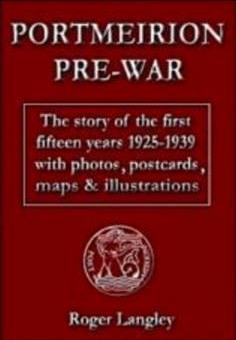 The story of how Portmeirion came to be is a rich, romantic, and amusing one. No other British architect has ever had quite the same good fortune that Clough Williams-Ellis had in realising an intensely personal dream on such a scale and over such a long period.

The romance and amusement come from the interaction of the place with its people – having opened his village as a hotel, Clough found himself, almost unwittingly and certainly incidentally to his own driving purpose, acting as host to a colourful variety of characters, both transient visitors and local neighbours. Clough tells much of the tale, very entertainingly, in his various guides to Portmeirion, written over almost fifty years.

What Clough doesn’t tell with such clarity is the “when” of everything (“I have never kept a diary, and all the records I ever had of anything whatever were destroyed in the fire that gutted my home in 1951”, he apologised), but looking back through the guidebooks in their various editions gives a feeling for the course the development took over time, while a search elsewhere - in the pages of the architectural magazines of the Twenties and Thirties for example - can hint at where, and in what ways, the eventual reality diverged from, and even exceeded, the initial vision.

Roger Langley has set out to produce a picture book which puts a little more flesh on the bare bones, framed as a year-by-year account of the process of building the village. With the right illustrations, the right feeling for what they show, and the ability to describe this to the reader and thus fire their own enthusiasm, this would be a hugely worthwhile project which would enlarge our understanding of Portmeirion, and educate and entertain its many admirers around the world.

Unfortunately, Mr Langley does not have the necessary feeling for his subject. “Portmeirion Pre-War” claims to offer “the story of the first fifteen years 1925-1939 with photos, postcards, maps & illustrations”, while its author is, at least in his own estimation, the expert on all things “Prisoner” and by extension, all things Portmeirion. The reader should, therefore, expect an exceptional piece of work. The reader is likely to be disappointed.

It may be that the writer has heard rumours of a similar publication being prepared elsewhere and has hurried out his own contribution as a “spoiler”. Whatever the case, “Portmeirion Pre-War” certainly has the feel of a rushed job. Between colour covers which, in a forewarning of what is to come, are strangely dark and unfocussed, we are presented with a chronology of Portmeirion from which all the spark of life has been removed.

To give just one example: in Clough’s own version there is an amusing tale of wartime anti-invasion preparations, and the beer shortage that had to be invented in order to have one particular set of anti-tank obstacles on the drive demolished, as they were making the normal life of the hotel pretty impossible. In this version, there is simply a statement that stone blocks were placed on the drive as obstacles during the war. Other enjoyable anecdotes are similarly emasculated. The presentation of the facts is not “wrong” as such (with a couple of exceptions – if Jonah Jones did paint the commemorative inscription at the base of the Campanile, he was only nine years old when he did so), but it is intensely dull. This effect is not helped by the peculiarly pompous tone, so that the future Edward VIII is “the royal personage”, and one word is rarely used if three will do.

But this is, or should be, primarily a picture book. Sadly, the dullness that pervades the text extends, quite literally, to the illustrations. It is pleasing to see, at last, a Roger Langley production printed on glossy paper, but the improved stock is to no avail when almost all the photographs seem to have been scanned through a heavy fog. Portmeirion is a bright and cheerful place, even on a grey day. In this book it looks pretty unremittingly dark and fuzzy, even though many of the photographs were taken in full sun.

The picture selection is an odd one too – most are taken either from early guidebooks or from the postcards produced in the Twenties and Thirties by Portmeirion Ltd itself. These are all very well in themselves, but are an extremely restricted set of views. Casting the net wider (and there is a huge amount of early material) would have produced a broader range of images which would actually illustrate the growth of the village and allow comparisons between, say, 1925 and 1935, and thus provide a proper setting for the text.

As it is, we are given various pictures which would be pretty enough, had their reproduction been better, but which also look like a rather random choice of what was readily to hand, by no means always the best examples to illustrate “the story of the first fifteen years”. A few are genuinely interesting for what they show (or don’t show, since these are early views of what was to become a more complex place in time), but Mr Langley does not draw our attention to the content of the illustrations, or attempt to explain or interpret them for us.

It is not lack of space that accounts for the strangely restricted choice of illustrations. A lot of room is taken up with very crude mock-ups of the reverse sides of postcards showing generally banal messages from early visitors to friends and relatives back at home. The few that have some interest could easily have been incorporated into the text, and the mocking-up of the messages makes this whole part of the exercise particularly pointless. In addition, the overall layout of the book is poorly thought through, so that the reader is referred a dozen pages ahead for one illustration, and twenty pages back for another. Cross-referencing has rarely made me crosser.

I would have liked to have been able to recommend this book as filling a gap that many had felt for years. The gap remains - what we have here is only a blurred and incomplete photograph album, with any meaning removed.