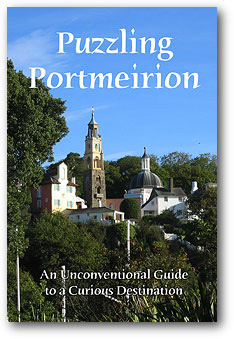 Prisoner fans are frequently accused of “reading too much into” the little details and nuances of our favourite series. Here at last is a book that does the same for the programme’s location. By turns weird, wonderful, and then even weirder, Puzzling Portmeirion is a strange, but oddly satisfying, companion to the more esoteric aspects of the village (few, if any, of which can have been Clough’s original intention).

The analysis of the spatial trickery and trompe l’oeil effects is quite well addressed, “treasure hunts” based on various details are included, and the whole book has a rather childlike innocence – reading it reminded me rather of how I felt (or at least what I can remember feeling) when I first saw Portmeirion at the age of nine.

The book also wanders off down some very odd mythical and mystical paths which I found less convincing (do fairies really live on toasted cheese in the Portmeirion woodlands? Craig Conley seems pretty sure they do), but one can view Puzzling Portmeirion as an off the wall, artistic response to an off the wall, artistic place, with something, at least, of interest for almost any reader. Potential purchasers with more esoteric interests than mine will also be interested, and very probably charmed, by the two sets of tarot cards using Portmeirion landmarks and details, which are also available (£15 and £10) from the same source.