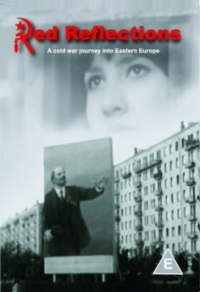 I recently had the opportunity to watch the Quoit Media DVD release of the never-before-screened Cold War documentary, Red Reflections, produced and directed by Richard Owen and Eric Mival. The project chronicled a group of international students on a four-week train journey through Eastern Europe into Russia. Filmed in black & white, the documentary was to be screened by Yorkshire TV in 1967, but never aired due to the rapid transition to color programming at the time. As a result, this DVD is the first opportunity in almost 50 years for audiences to see the film. It will also be of interest to fans of Patrick McGoohan, as it features a previously unheard "guest narration" recorded by the actor at the time he was making The Prisoner (co-director Mival was music editor on the series at the time).

I was already familiar with one of Mival's other projects as a director -- the 1975 short film, It Happened Here Again, which documented the making of the feature films It Happened Here (1964) and Winstanley (1975), both directed by the team of Kevin Brownlow and Andrew Mollo. When I heard Red Reflections was being released, I was obviously interested to see it, but I kept my expectations low -- I assumed it would be a grainy, slow-moving travelogue of bleak landscapes and deserted cities. Instead, I was pleasantly surprised at how interesting it turned out to be, both as a contemporary (1966) commentary on society and as a perfect time capsule of that era seen from today's perspective. The film's intent was to show how people living under Communist rule behind the Iron Curtain were not a faceless army bent on destroying Western society. As the students discover in their travels, the people they encounter are surprisingly similar to themselves in values and perspective (many are fellow students of the same age as well). Likewise, the cities they visit in Hungary, Poland and Russia are surprisingly beautiful with stunning architecture that has witnessed centuries of historical events.

Much of the photography features the hand-held "cinema-verite" style that was in vogue in the sixties, yet many sequences are balanced out with fluid tracking shots filmed from the train the students travel on. The editing is top-notch as well -- at 39 minutes, the story zips along at a steady pace that keeps the narrative moving and never allows the viewer to become bored. The film also avoids overusing its narration. In many instances the voice-over pauses, letting the viewer silently experience the atmosphere of each city. The sequence in Czechoslovakia is particularly well done, with images of the architecture and landscape of Prague scored only with sounds of nature and the tinkling of an ancient music box. I was so engrossed in the first several minutes that I forgot McGoohan's voice-over was still to come. I won't spoil the context of how his narration is used, but it is perfectly appropriate and highly entertaining. Although it lasts just a few seconds, admirers of his work can't help but smile when they hear it -- his delivery possesses the sparkle and energy of 1966-67 when he was appearing in Danger Man and The Prisoner.

The only real criticism is the somewhat sub-par sound quality. Most of the narration is at an acceptable level, but several sequences of interviewees speaking on location are difficult to make out. Interestingly, this issue is addressed by the directors themselves on the DVD interview extra. Mival explains that they did not have "synched sound" on their camera and thus had to record the audio separately. Later in editing, he had the difficult task of manually synchronizing the sound to the film.

The DVD is presented window-boxed in a 4:3 ratio, with the picture quality being surprisingly good. In a few instances the film suffers from specks and dirt, but this can be attributed to the age of the print, and the fact that the DVD was mastered from most likely the only copy ever made. (Potential viewers in North America should be aware that this is a UK-manufactured disc viewable only on Region 2 players.) As a result, those interested in mid-20th century history or the Cold War era should find this "new" film worth a look. Congratulations (fifty years late!) to Owen and Mival for providing a fascinating insight into a pivotal time of the 1960s; and kudos to Quoit Media for filling two small cultural gaps -- one in the history of documentary film, and the other in the career of Patrick McGoohan.


I'd like to dedicate this review to Robby Griffith (1957-2015). He was a longtime coworker of mine, a Shakespearean actor/enthusiast, and a fan of 1960s TV. His favorites from that time were Batman, The Wild, Wild West and The Prisoner (he once told me the first time he'd ever heard of Drambuie was from watching "The Girl Who Was Death"). We were always trading obscure film and TV recommendations, and I was planning to lend him my copy of Red Reflections. I'm sure he would have enjoyed it...

"Red Reflections" is available at The Village Shop for £14 including free worldwide shipping, The Quoit Media Website HERE, eBay, and below from Amazon .