The Unmutual Reviews: The Prisoner: The Original Scripts - Volume 1.
Edited and Annoted by Robert Fairclough. 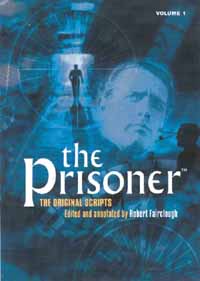 "The Prisoner" TV series has received much praise over the years for its themes, allegorical content, atmosphere, and acting. Also often praised is the writing and dialogue in the series (and how it was so wonderfully adapted for the screen by the crew of the series). But can this writing be as interesting if reproduced in its original script form? This was the task faced by Robert Fairclough ("the Prisoner Official Companion", "The Prisoner: Official Fact File") when he embarked upon the task of reproducing the original "Prisoner" scripts - the first Volume of which is being launched at a special party, complete with "Prisoner" guests, on June 4th 2005.

The book begins with a heartfelt foreward by the late Lewis Griefer (writer of "The General" under the psudonym of Joshua Adam), an introduction by the author, and then a reproduction of the original ITC "Prisoner" writers guide created for the series' writers by Story Editor George Markstein which is a most interesting read! Then follow the original shooting scripts for the first 8 episodes of the series.

Each is reproduced in full, along with cast lists, transmission dates, writers details, original TV Times "trailers", and music cues. The highlight of the reproductions, other than being able to witness the superb scriptwriting, are the endless footnotes supplied by the author. Every single subtle change from the original script to the finished programme are highlighted in these extensive notes, as are interesting snippets of information concerning the filming locations, shooting schedule, performers, crew, and much more. The amount of information Rob has managed to include is not far from astounding, and the mind boggles as to how many times he must have watched the episodes to include every otherwise unnoticeable word change. The above-mentioned footnotes are fascinating, and make this book the ultimate tome of "Prisoner" information.

Also included is "The Outsider", an unused script written by Morris Farhi (rejected by McGoohan), and two storyline ideas submitted by series Music Editor Eric Mival, as well as a biography of George Markstein. It could be argued that the scripts and footnotes would be enough to justify a positive review, but these rare "bonus items" are the icing on the cake and also make for fascinating reading.

Those familiar with the scenes of "The Prisoner" could be forgiven for thinking that reading such a book might be a dull experience, as they already have the episodes on DVD, but they couldn't be more wrong. Whilst much of the scripts remained unaltered for the finished product, there is much that is different. Small/subtle changes in some cases, large changes in others, each and every one is included. Two such interesting things include the inclusion of the "original" Rover device, complete with flashing blue light, and mentions of Number Two's residence as the "Georgian Cottage", rather than the more familiar "Green Dome".

To list all the interesting script changes here would be an impossible task, so I will close by advising that you go out and buy this book and see them all for yourself. At £19.99 (hardback) it is by no means cheap, but is well worth the price for the scripts alone, let alone all the "bonus items" and countless footnotes.