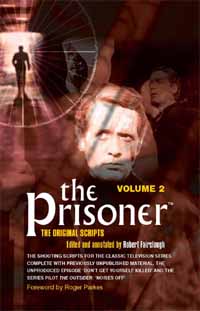 In April 2005, I had the pleasure of reading and reviewing Volume 1 of "The Prisoner: The Original Scripts" and came to the conclusion that the volume was more-or-less faultless, and essential reading for all "Prisoner" fans. It was therefore with much anticipation that I awaited the 2nd volume of the book, which will be launched at a special-guest-laden party in London's Soho on 8/4/2006. Could it be as riveting as the 1st Volume?

The second volume deals with the last 9 episodes of "The Prisoner" ("Checkmate" to "Fall Out" inclusive) in a similar format to the first. The original script for each episode is not only reproduced in full, but editor Robert Fairlough has painstakingly footnoted every difference between the script itself, and the finished televised version. Whilst for some episodes this may seem a simple, yet time-consuming exercise, for others it is not.

It is a matter of public record that "Do Not Forsake Me Oh My Darling" was extensively re-written after Vincent Tilsley first submitted it as "Face Unknown" but not until now have I been able to witness just how radically different the final version is compared to the original. Robert's footnotes for this episode are more detailed than the original script itself, and one can only imagine how much time and research was required to make this section of the book as detailed and fascinating as it is. "It's Your Funeral", and "The Girl Who Was Death", also included several more scenes than that which were shot. I'll leave it for you to see for yourselves what these scenes were, but it's worth noting that Robert, as with the first volume, has managed to outline these differences in a very readible and accessible way so's not to confuse the reader.

All the other episodes in the volume get a similar treatment, with all the changes noted, alongside countless fascinating facts about the production of the episode, the actors eventually seen on screen, the locations for filming, biographies of the writers and Directors, transmission dates, and the original TV Times "blurb", plus details of the music heard in the episodes. Put simply, this isn't just a collection of scripts, but an entire guide to every segment of every episode of the series.

Also included in this volume is a delightful foreward by "A Change of Mind" writer Roger Parkes, a history of Everyman Films (under whose umbrella "The Prisoner" was made), plus 2 unshot scripts. The first is "Don't Get Yourself Killed" by "Checkmate" writer Gerald Kelsey which, upon reading, seems to me would have made a fascinating episode (the plot of which I won't spoil for you here). The other unshot script included is one which has never been previously published and also makes for fascinating reading.

"Noises off" was to be the pilot episode of a follow-up series to "The Prisoner" entitled "The Outsider". Written by Lewis "The General" Griefer, and starring Patrick McGoohan as Johnny Quill, the script very much kept to the ideas espoused by "The Prisoner" and its inclusion in this volume is both welcomed and unique. Also included, and much welcomed, are extracts from interviews conducted with cast and crew, when required, including snippets from Roger Goodman's in-depth interview with McGoohan in 1979.

Any quibbles? Not really. On a few occasions I spotted a slight change from the original script not noted in a footnote, but such differences are so minimal (and pretty much expected and present in almost every line of dialogue, such as a one-word grammatical change in an otherwise unchanged line of dialogue) that any attempt to do so would make the book a totally unreadible one filled with unnecessary complication.

Whilst the first volume of "The Prisoner: The Original Scripts" was essential, the second volume is simply unputdownable. From Kelsey's delightful "Checkmate", through to the allegorical conundrum that is "Fall Out", the original written scripts are as fascinating to read as the episodes themselves are to watch, and coupled with Robert's wealth of footnotes, from script changes to delightful titbits of production information, make this arguably the most important, and most complete, "Prisoner" book ever published (especially when placed alongside Volume 1).

The detailed bibliography which finishes the book is a timely reminder of the research that others, such as Simon Coward and Steven Ricks, had done previous to Robert's own undertakings - but only now, through Robert's hard graft, has all this information finally appeared together in such an accessible format.

It is unlikely that an undertaking of this nature in "Prisonerdom" would ever have been attempted had it not been for Robert's determination and expertise and for that, and the finished product of over 1000 pages for the 2 volumes, Mr Fairclough should feel very proud.