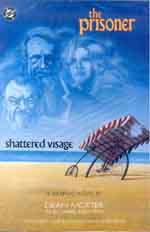 In the 1980s, comicbook artist and writer Dean Motter was nurturing his own dreams for a new "Prisoner" saga, and these bore fruit in the four-part DC Comics series, later re-released in one volume. For those people who were eager to see a screen sequel to "The Prisoner", the comicbook saga could perhaps be considered the next best thing. Like the ill-fated CBS screen project, Motter and co-writer Mark Askwith take as their basic premise a look at what might have happened to our hero 20 years after the events of "Fall Out".

Frankly, however, to this Prisoner afficianado, at least, it has to be said that the comic books were a major disappointment. The idea of launching (almost literally!) a new prisoner into the Village, to find an old and grizzled No 6 (now apparently thinking he is No 2), followed by the reappearance of Leo McKern's aging No 2, was potentially appealing. But surely any sequel to "The Prisoner" must take as its starting point the closing moments of "Fall Out". At the end of the TV series, we see No 6 and Leo's No 2 return to London and depart as friends - or allies, at the very least. So the comics' whole premise of their rerturn to the Village, and their sworn enmity a la "Once Upon A Time", is a concept that is deeply unsatisfying and one that this reader, at least, found almost impossible to accept.

Book A, A(r)rival, simply sets the scene, with the heroine of the tale (the change of gender being a neat touch)
apparently resigning from her job to make a solo sea voyage. Shortly after setting out, she is beset by a hurricane and finds her wrecked yacht washed up on the shores of the Village we all know and love. Tantalisingly, the first book closes with her (and our) discovery that the place is still occupied by a sole resident - an old and gnarled No 6, who has apparently assumed the mantle of No 2. And on the very last page he tells the heroine chillingly in answer to her questions: "You are No 6". The first half of Book B, "By Hook Or By Crook", is largely taken up with the old and new No 6s (this gets very confusing!) touring the Village as the heroine gets to know more about the place and its purpose.

Halfway through the second book, and for no apparent reason, we see the return of Leo's No 2, accompanied by a similarly aged Butler, and the mysterious reactivation of the Village, culminating in the release, from sleep, of Rover. The heroine then hears the other side of the Village's story (and history) from No 2's standpoint. Woven through these scenes, and flashing back and forth between them in a most confusing manner, is a somewhat trite parallel storyline involving the heroine's estranged husband, Thomas, and a puzzling char acter called Lee West, apparently some sort of American agent, who is readily identifiable throughout the story by his sweatshirt bearing the number "5".

In Book C - and for motivations which are sadly unfathomable to this reader - these two characters plot a return to the Village, not to rescue the heroine, as one might have gathered, but apparently to gather up all the information stored there. Before we see this, however, Book C lives up to its title, "Confrontation", with a bizarre fight - seemingly to the death - between the old No 6 and the old No 2. It has to be repeated here that this whole sequence is one of the most disappointing elements of the whole storyline, and its inclusion seems to say more about the authors predilections as comic writers than it contributes to an understanding of the basic plot.

Anyone reading Book D, "Departure", in the hope of seeing all these various strands resolved into one satisfactory conclusion will have been - like the viewers of "Fall Out" many years before - sadly disappointed. The concluding chapter in the saga is, in many ways, the most unsatisfactory of the lot. The story (and by now one has to use that descripton loosely), seems to go off at several tangents at once, with a mysterious murder, paratroopers invading the Village, and the revelation that the place was actually the cover for a huge underground missile silo. We then see a rehash of the "Fall Out" rocket launch and the destruction of the Village.

As others have noted, the final book raises many more questions than it answers. The most glaring omission, to this reader, is any explanation of how the heroine manages to escape the holocaust unleashed by the old No 2. Indeed, the first we see of her in Book D is at the very end when she is apparently safely back in London. Eh?

This reviewer is no comics fan as such, so it would perhaps be impertinent to comment too much about the actual artwork of the four books. Motter and colour artists Dave Hornung and Richmond Lewis certainly capture the spirit of the Village quite well, but it's a shame that so much of the artwork is "muddy" (due to night-time settings, admittedly), and it has to be said that the comics fail to do full justice to what must be one of the most attractive (to an artist) places in the Western world. Reading through the books, it is a constant source of interest - although some readers may find it irritating -to find the authors' many little references to the TV series, its actors and crew. Some of these are mentioned elsewhere, but this reviewer particularly enjoyed seeing the Tomblin juke-box and the name Dr Sid Rafferty appended to the Martin Lake autopsy report.

It was also intriguing, in Book D, to see the brief introduction of Mrs (Georgina) Butterworth - albeit bed-ridden - to the story, although there's a hundred work units on offer to anyone who can explain the significance of this little cameo to the proceedings. All in all, then, perhaps the politest thing that a Prisoner enthusiast can say about the DC comicbooks is that they are interesting. Many fans will have rushed out to buy them on the strength of the title alone, and reaction has been mixed. Ultimately, of course, it is just impossible to produce a scenario for a Prisoner follow-up that can satisfy everyone. But there must surely be at least a few more plausible storylines than that dreamed up by Mr Motter.