The Unmutual Reviews: Simon Wells Live at The 100 Club.
Review by Rick Davy 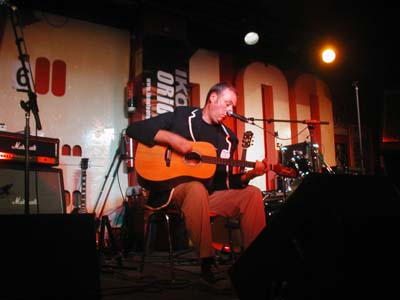 The 100 Club in London's Oxford Street has played host to some of the World's most famous groups, including The Sex Pistols and The Rolling Stones so it could be said to be odd that such a venue could be mentioned within "Prisoner" circles specifically.

Events at the venue took a Prisoneresque twist on Tuesday December 19th 2006 when writer and historian and accomplished musician Simon Wells took to the stage for a Prisoner-themed acoustic set. A packed audience awaited 4 "mod" acts, and the first was Simon.

An empty stage was all that could be seen. Suddenly, a crash of thunder, a Rover bouncing accross the stage, and the familiar "Prisoner" theme tune blasting from the PA system of DJ Dave Edwards. Onto the stage, which had been re-named the "600 Club" by Simon to rapturous applause, came Wells in full "Prisoner" garb and announced "the first song is from the Patrick McGoohan album Fall Out".

What followed was a beautiful acoustic version of The Beatles' classic "All You Need is Love". Simon is a very accomplished singer and guitarist and his vocals and melodies filled the venue, and between tracks nothing could be heard but the sound of applause from the audience (no chatting) as everyone was enthralled by the performance. Covering such classics as The Who's "One" and "Magic Bus" amongst others, along with "In The Village" ("what happens when you cross Patrick McGoohan and The Jam", said Simon) the set whizzed by.

The Rover balloon was a complete act of serendipity, as Simon explains: "A very, very strange story - the sort of thing you really would only expect to take place in Portmeirion and not in the bowels of Oxford Street! For the event I dug out my Number 6 blazer (which I hadn't worn for 10 years), my fawn slacks and a pair of boating shoes (not blue sadly). I mocked up a Number 6 badge and photocopied a large 6 (I couldn't resist making the 100 club the 600 club for the night). However, I had thought about getting a rover balloon, but given the logistics, had passed on it (try getting that down Oxford Street in December?!) Imagine then, my surprise when I emerged from the dressing room, to find a largish white balloon waiting by the door. Totally amazing, I had nothing to do with it (it was another acts idea to promote their website!) So that really made my night. Watching it bound up to the stage was fantastic!"

The 3 acts that follwed Simon were, by contrast to the opener, disappointing but Simon's performance was worth the £10 entry fee alone. Simon hopes to play more gigs in the future - keep an eye on The Unmutual Website for details as and when.