Review by Rick Davy, with thanks to Mariocki. 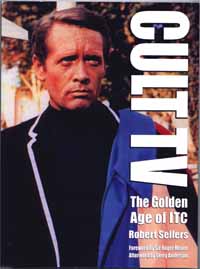 There have been several attempts over the years to offer TV fans a look at "Cult TV" shows in book form, and November 2006 sees the release of the latest: "Cult TV - The Golden Age of ITC" by Robert Sellers.

What makes this book different from previous attempts at cataloguing the genre is that Robert has dedicated the entire book to ITC shows, and wisely decided not to follow the tried-and-tested method of resumes and episode guides (many of which are already available). Instead, the book is written more in "story format" from start to finish, and thus is a flowing and affectionate tribute.

If you only have the money or inclination to purchase one "overview" book about ITC or Cult shows, then this is the one for you - being both an enjoyable and affordable read.

The book is divided into 11 chapters, and begins with a heartfelt foreward by Sir Roger Moore, who talks fondly about his "entries" into ITC legend, and Sir Lew.

Chapter One is entitled "Glorious Lew" and is a brief biography of the great man, Chapter 2; "Quivering Bows and Clunking Armour" covers "Robin Hood", "Sir Lancelot", "Buccaneers", "William Tell" and "The Invisible Man", Chapter 3; "The Puritan and The Halo" covers "The Saint" and "Danger Man", Chapter 4; "Puppet Master" covers Gery Anderson's best-known shows, Chapter 5; "Ghosts in the Machine" covers "Mand in a Suitcase" and "The Prisoner", Chapter 6; "Fairy Stories for Adults" covers "The Champions", "Department S" and "Randall & Hopkirk (Deceased)", Chapter 7; "No Strings Attached" is "UFO" and "Space :1999", Chapter 8; "The Kitsch Squad" featuring "Jason King", "The Persuaders" and "The Protectors", Chapter 9; "The Ultimate Variety Show" with "Thriller", "Zoo Gang", "Muppet Show", "Jesus of Nazareth", "ROTS" and "Sapphire & Steel". Chapter 10, "And Not Forgetting", is a brief resume of some of the shows not already covered (featuring "Sir Francis Drake", "Gideon's Way", "The Baron", "Strange Report", "The Adventurer" and "Hammer House of Horror". Chapter 11 is "Mr Television - A Final Tribute", and the book is finished off by an afterword by Gerry Anderson followed by "ITC TV-ography" listing the regular cast, main guest stars, writers and directors plus the number of episodes for each series.

The book concentrates on arguably the most popular series, with others only getting a brief mention (or not included at all) but this book was never intended to be an encyclopaedia. The author has wisely opted to make the book appealing to a wide cross section of the public, presumably on the maxim that you can't please all of the people all of the time. A whole chapter on every series made under the ITC umbrella, while interesting for aficionados of ITC, wouldn't entice the casual fan and would push the page count, and therefore the price, up to unacceptable levels to make it viable. At just under 300 pages, the book was always going to be a compromise but there is more than enough in terms of photos, interviews, and information to keep any reader happy.

Whilst some of those names are familiar on the convention circuit, others are not and there are more than enough interesting quotes and recollections to keep even the most knowledgable fan interested, with those by Frankel, Donner, and Bradford being particularly worthy of mention.

With regards to the series' with which this reviewer is most familiar, "Danger Man" and "The Prisoner", there is not a great deal of new information or anecdotes as far as I was concerned (although it was interesting to read DM Director Clive Donner's recollections). Nevertheless, one is never short-changed by the interesting views of people such as Jane Merrow, George Baker, and Peter Graham Scott, however oft-quoted some of these recollections are.

However, it was a shame, with so much written about it and so much history and information available, that much of "The Prisoner" section deals with McGoohan as a man, rather than the production of the series itself, and with Annette Andre's dislike of him well documented, i'm not convinced that it needed to be repeated here, nor the views of Robert Tronson (who did not work on the series and is included in this section because he knew Leo McKern). With so many cast and crew willing to talk about their time on ITC series, it might be said to be more desirable to have interviewed a few of these, rather than relying on more "peripheral" views being included.

But i'm certainly being over-critical here. For its size and price, one cannot expect the book to deal with everything and everyone (although with space at a premium one wonders therefore why unimportant conjecture and opinion is included as often as it is), and this reviewer most certainly did not have any problem with any of the other chapters in this way, and is perhaps being too precious about the "Prisoner" section, which still flows well and is nicely and interestingly written.

There is also the odd error here and there. For example, "The Champions" ran for 30 episodes and not 26 as stated in the narrative (although it is corrected in the ITC TV-ography), The Persuaders! is missing the ! throughout, some of the later series are ATV rather than strictly ITC, and being that it was filmed back to back with "Chimes of Big Ben" i'm not convinced that Leo McKern was drafted in "at short notice" to appear in "Once Upon a Time".

But these are very minor quibbles and should not detract from anyone's enjoyment of the book.

As I am by no means an expert on several of the shows included (in particular the early swashbuckler series) I am perhaps a good person to judge this book, being able to cast an eye on series' which I would call myself an expert, and others where I am a complete novice. One of these is "Man in a Suitcase" and I found this chapter particularly interesting, with much of what was included completely new to me, with the "Randall and Hopkirk" section also thoroughly enjoyable.

In summary, the two or three shows about which I may be arrogant to say "heard it all before" are still an enjoyable and interesting read, and the other sections are quite exceptional as background into them. Fans of those shows in question may disagree, knowing more than the casual reader and perhaps the author, but this is why the book gets an overall thumbs up from me.

If you're a newcomer to ITC shows this book is an excellent starter point. If you're an aficionado and know all there is to know already, you'll find it a nice refresher with some new quotes, and if you're somewhere in between it is simply a damn good read!

With thanks to Plexus Publishing for their help and the review copy.