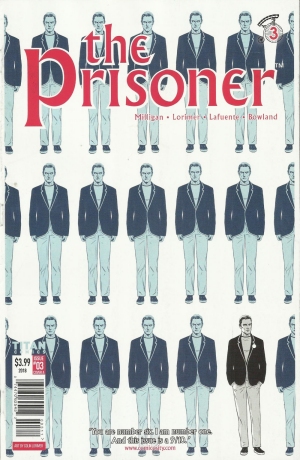 Issue 3 of Titan's The Uncertainly Machine The Prisoner comic is perhaps the issue of the four-part series that I have been most intrigued to read, since issue 1 was launched a couple of months ago. The first issue set the scene, and then we had the 'difficult second album' which was beset by a little inconsistency and proofing issues, so I am delighted to say that issue 3 has seen this re-imagining of The Prisoner raised to a whole new, and unexpected, level.

It's always difficult for 'Prisoner-reimaging' writers, whether they are involved with books, audios, TV, or comics, to find an interesting new angle with which to tell the story of 'the man in isolation', but in issue three we see this new, and unexpected, angle achieved. Say what you like about people re-writing McGoohan's Prisoner (and some have a lot to say), but Peter Milligan knows how to write a compelling adventure story, and issue 3 is a great page-turner of a tale, superbly brought to life by Colin Lorimer's vivid artwork.

No spoilers here, but Breen finds himself in a series of situations which would not have looked out of place in the original series, but more than that, in situations and places that viewers were crying out for in the original ('just what happens in that hospital?', 'what is Rover? Where does it come from?') but never saw. The interior workings of the Village are always something which I felt could have been explored further, and it's great to see that Titan have taken this brave, but important, step.

Breen is becoming a more likeable and sympathetic character as each issue moves forward, and in issue 3 we see that compassion turn to confusion, as another character provides a possible answer to the question of ''whose side are you on?' It's this allegorical mind-muddlement of the viewer which made The Prisoner the well-remembered series it has become, and rather than litter its pages with iconic imagery, hoping that it would be enough to carry the story, Milligan, Lorimer, and editor David Leach, have wisely chosen to give issue 3 its own direction, taking us to new and fascinating places in the Village, and in the mind of the lead character.

After an interesting start, and a slightly wayward second issue, this series has me hooked, and we're back on track for an exciting finale. Will I get the answers? Part of me is hoping that, as with the original, an allegorical ending awaits.

Where am I? Immersed in Titan's Village!