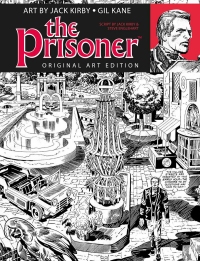 In the mid 1970s Marvel employed two of its top artists to turn the enigmatic British TV show The Prisoner into a comic book. Here at last are both abandoned versions, by Jack Kirby and Gil Kane, scanned from original artwork and presented with some fascinating additional material.

When I became a fan of The Prisoner in the 1980s I discovered that there had been two Marvel adaptations of opening episode Arrival. I tried – to no avail – to source copies, but I then discovered that while these comics had been written they had never been published… until now. Thus ends a 35-year wait (for me anyway) as Titan release them in this prestige edition, something of a Holy Grail for Prisoner fans at the tail-end of the 50th anniversary celebrations.

Let’s make no bones about it, this one is for the fans with deep pockets – with an advertised RRP of £71.99 (though you’ll find it from £46.99 on the web) this is a costly addition to your library for a 74-page book of unfinished artwork. That said, the contents are beautifully reproduced and this is a product aimed at the hardcore collector rather than the general fan. While this prestige printing may make it seem more attractive to the connoisseur it does seem a shame that the less cash-rich comic book fan will find this way out of their budget, particularly if their interest in Prisoner comics has been piqued by Titan’s own current mass-market four-part series.

Ignoring the price, what’s inside the hardback covers? A Foreword by Mike Royer recalls the time in 1984 that he gave Patrick McGoohan a colour drawing that he’d created. The actor was allegedly aloof while around the studio where he was filming Baby, but was impressed by the gift.

All 17 pages (yes, us fans like that number) of The Prisoner by Jack Kirby then follow, the first five pages being inked. There’s a gorgeous two-page spread of the Village square, complete with parrot(!) which is reproduced in colour later in the volume. After these five pages we get to see Kirby’s original pencils pre-inking, though the lettering has been completed.

The story begins in the Village, with the opening credits featuring as a flashback. I particularly like the way that a coffin is used to take our protagonist out of his flat into a hearse (what else would you use?) and Jack Kirby’s lantern-jawed style works well with McGoohan’s face – the hair is spot on. Number 2 is in The Georgian House rather than The Dome, and there are other curious tweaks and changes. Number 2 looks far more like Derren Nesbitt’s version than Guy Doleman, with blonde hair and thick-rimmed spectacles, and it ends after Number 6 has had his helicopter trip. We’re promised that in the next issue we will be “…spellbound with new revelations… and new gimmicks!” Sadly that never would be.

Gil Kane and Steve Engelhart’s version of Arrival is more authentic, showing a more dynamic design in its layout. At 18 pages, the splash page features the iconic KAR 120C as a regular roadster rather than the iconic Lotus 7, though this is remedied by a tweaked version of it (also included in the book) and used as promotional material for the 1976 Bay-Con.

There’s no speech bubbles on the pages, just blue lines where they would have been placed, though there’s another version later in the book where the bubbles have been added on smaller scale scans, alongside original script pages. There’s no Alouette helicopter this time, though we do get a good look at Rover and there’s a nice approximation of Peter Swanwick’s Supervisor. We even get told that George Markstein’s character who’s served the resignation is called Belson – a new one on me. The next issue promises The Chimes of Big Ben, but again…

Finishing the book is a feature Writing The Prisoner – Steve Englehart on how he fought for the project, wrote the script overnight and left Marvel – ITC’s The Prisoner Press Book – all 25 pages, though reduced to 4 to a page – and Story of The Prisoner by the Unmutual Website’s Rick Davy which offers a concise, potted history over two pages on the production of the show. Biographies of Jack Kirby and Gil Kane complete the volume.

Verdict: A very welcome release of some rare The Prisoner comics by top Marvel artists, presented as a high-end product, it’s just a shame that the price will be a barrier for many. 8/10