The Unmutual Reviews: The Prisoner Who's Who by Roger Langley
No ISBN (self published). 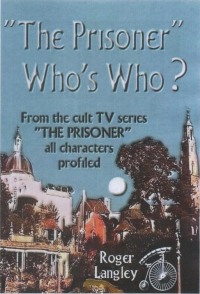 I was sat in my office the other day, cleaning out the bowl of my pipe, when suddenly the door was flung open, and in stormed the editor. He paced up and down, ranted and raved at me for a few minutes, then slammed a booklet down on my desk, and said write something about this. Then stormed out again, slamming the door shut behind him! I looked at the booklet lying on my desk, filling the bowl of my pipe, I lit it with a match. Picking up the booklet, I turned it over in my hands a couple of times, before opening it. The booklet is all about numbers, the numbers worn by the cast and film extras in ‘the Prisoner’ series, and the characters who wear them. Hence the title ‘The Prisoner: Who’s who?’ However in this endeavour, Mister Langley has fallen somewhat short of the mark! It is stated in this work, that ‘Living In Harmony’ is the only episode in which the being known as Number One, is not mentioned. Well if the author is omitting the opening sequence, I suggest that the same can be said of ‘The Schizoid Man,’ ‘Many Happy Returns,’ ‘A Change of Mind,’ and ‘The Girl Who Was Death?’ The author goes on to list the No.2’s in the series, he missed one, possibly three. No.6, who was the new No.2 in ‘Free For All,’ who probably enjoyed the shortest term of office of any of the No.2’s! The President, the former No.2 of ‘The Girl Who Was Death.’ I suppose it does stretch a point, but remember it is the President who gives the order to evacuate the Village, and role playing is not beyond any No.2! I could stretch the point even further, by suggesting the Supervisor-No.26, who was promoted to No.2, by No.2 in ‘Once Upon A time.’

There are a number of miss-numberings which appear in this booklet, the leader of the Brass Band for example is attributed with the number 22, when it is in fact a three digit number, either 232, 252, or 262, the middle digit is somewhat obscured. Much clearer is the Shopkeeper’s number in ‘Hammer Into Anvil,’ 112, and not 12 as stated by Mister Langley. And mentioning Shopkeepers, Denis Shaw, the Shopkeeper in ‘Arrival’ who wears two different numbered badges in the same scene, 19 and 56, was missed out altogether by the author! And then there’s Michael Miller, who as No.93 in ‘A Change of Mind,’ finds confession is good for the soul. However Michael Miller first appeared in ‘the Prisoner’ in the episode ‘The General’ as No. 256, and that fact also goes un-noted. The author claims the number 66 to have been worn by two different actors in ‘Arrival,’ first by Stephanie Randall {No.6’s personal maid} and Frederick Piper {the ex-Admiral}, and that is correct, except that four people actually wear the number 66. The first ex-Admiral, who is seen sitting by the ‘Free Sea’ as the Prisoner passes by on his way to the Labour Exchange. And the taxi driver who collects the Prisoner from the hospital to take him back to the Village. The number 34 in this booklet goes unassigned, which is something I personally do not understand. No.34 was a man being watched by Observer-No.240, whom her Supervisor-No.22 said had died. No.6 found a dead man in the water on the beach. In the dead man’s pocket was a wallet. In the wallet a picture of the man with a woman sitting together by the pool and fountain in the central Piazza in the Village, that man was No.34! No.100, a character played by Mark Eden, is made description of as being “an important player in the convoluted assassination plot,” yet he is attributed to ‘Dance of the Dead,’ when it should be ‘It’s Your Funeral!’ And the Supervisor played by Earl Cameron, is No.106, and not 126 as stated in this booklet.

The one saving grace of this booklet is, that it is not widely available to the general public, yet even saying that the author Roger Langley has “nailed his numbers to the mast!” The author makes mention that the Penny Farthing on the badges can face to the left or the right, but makes no attempt to explain why. Or the fact that badges are of the positive and negative nature. A white background with a black Penny Farthing, or black background with white Penny Farthing, or why only one No.2 wears the negative badge, that is the only badge to have a white number 2. Also the fact that numbers on badges had been manipulated by the use of tip-ex. If a single digit number was required but not available at the time, then a two digit or even a three digit numbered badge, would have the extra number or numbers tip-exed out. So to turn a number 28 badge into 8!

I found the booklet disappointing, both by the innumerable errors, and by that which it failed to contain. It is almost as though the author has only gone to half measures in producing this booklet. This is a work done to half measures, the author should have gone that extra mile during his research, it would have made all the difference.

EDITOR'S FOOTNOTE: Please note as with all but one of Roger Langley's publications, this book has been self-published and is an "unofficial" tome. It contains many photos for which he has not secured copyright permission. Ironically, when using one photo of his own he shouts "NOT TO BE REPRODUCED WITHOUT PERMISSION FROM THE AUTHOR" or similar. This therefore can be termed a "pirate" publication. If you choose to purchase a copy you are directly funding and rewarding immoral or illegal behaviour. Click HERE for more information regarding Roger Langley.