IN THE PRISONER: In the episode "Fall Out", Number Six and the Butler run for a bus along Westminster Bridge.

IN REALITY: The Bus finally boarded by Number Six and The Butler in "Fall Out" is a Number 59 bus - London Transport AEC Routemaster/Park Royal of the xxxCLT batch, numberplate 396 CLT (destination South Croydon Garage). A Number 88 Routemaster can also be seen in "Many Happy Returns", when Number Six disembarks the Netco truck near Marble Arch.

However, it came to light in March 2006 that 2 totally different bus types were used. Towards the end of "Fall Out", Number 6 and the Butler run along Westminster Bridge to catch the bus. When the bus flashes past the camera, it is clearly a (then) experimental front-entrance, rear-engined bus. This is most obvious when you look at the back of the bus as it passes the camera; there's no rear platform! When the scene cuts to Number 6 and the Butler boarding the bus, it has transformed into the traditional rear-entrance Routemaster bus. The front entrance bus is of the XA Leyland Atlantean type which was then being used experimentally by London Transport. 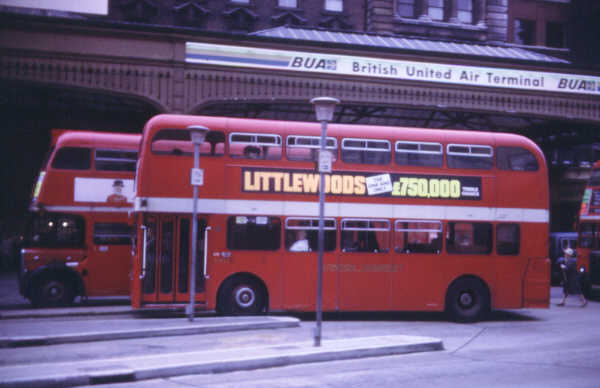 This suggests that a bus was not appropriated by Everyman Films for filming of this sequence, and that the crew utilised passing buses. The 59 bus in 1967 only ran along that route on a Sunday, which backs up the theory that these sequences were shot on the same Sunday morning as those at Trafalgar Square seen earlier in the episode.

The Routemaster buses were withdrawn from service in London after 50 years service in 2005, with the exception of a few for heritage trips. More information and images on the XA and London buses generally can be found at http://www.yellins.co.uk/transporthistory/Bus/xa.htm.