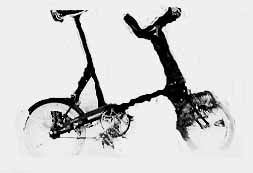 IN THE PRISONER: The canopy-covered bicycles seen throughout the Village scenes, and the bicycle seen in "Once Upon a Time" in the Embryo room.

IN REALITY: This vehicle comes tinkling into view as soon as Number Six is introduced by Number Two to the thriving Village - the small wheeled Raleigh RSW 16 Bicycle. The gleaming new green bike is also seen standing on the set of the Episode "Once Upon a Time".

The first small-wheeled bicycles were introduced in the early 1960s by someone called Moulton, who could not sell the idea to the big manufacturers and so went into production himself. The success of his design made the established firms think again, and the RSW 16 was Raleigh's answer. The rationale behind the two-inch tyres was to provide a measure of comfort, and to try to emulate the spring suspension which was a feature of the Moulton design. Raleigh gained more by the distinctive image that was created, and made the bike a fashionable item.

It was this fashionable image which led to the bicycle being included in the Village scenes to compliment the Penny Farthing symbol. The addition of the sunshades to the Village machines was a fabulous joke, as riding one (particularly with a crosswind) would be difficult. As well as The Prisoner, a mass of RSW16's can be seen in the film "The Great St Trinian's Train Robbery".